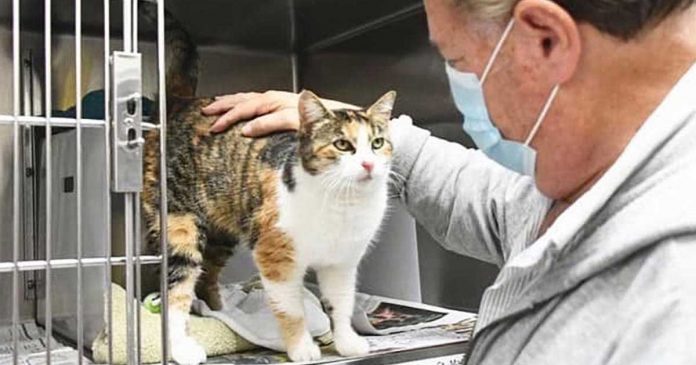 On the third anniversary of the landslide disaster in Montecito, California, a cat reunites with his family

Following devastating landslides and mudslides in Southern California in January 2018, a cat is reunited with his family after being miraculously found.

The cat was thought to have died in the landslides, but after three years it was found less than a quarter of a mile from his home.

The cat named Patches had initially disappeared since the debris flow began in the city of Montecito on the morning of January 9. According to The Angeles Time, the damage caused by the landslides was so extensive that 100 houses were destroyed and more than 300 damaged.

Among the victims of the accident is Josie Gower, who was the mother of Patches. Her husband, Norm Borgatello, managed to survive.

Norm had also been missing since the natural disaster struck, until he learned of a homeless cat who was in an animal shelter.

The animal was in the Animal Shelter Assistance Program (ASAP), in Santa Barbara, there volunteers were in charge of taking care of it and after registering its microchip, they found out that it was Patches.

The feline was registered with a microchip in Josie’s name, which made it easy to contact his family and manage to schedule a meeting, which at that time no one thought possible.

ASAP did not hesitate to share the story on social networks, since it was precisely three years after the accident; this news would be pure happiness.

“It was a shock when I scanned his microchip to find out that it was Patches.”

When the shelter contacted Norm, the man had no idea that Patches was still alive.

Upon hearing the news, he was a little overwhelmed and surprised, but he did not hesitate to go to the shelter to meet his pet. The funny thing was that the cat had been discovered less than a quarter of a mile from his original home in Montecito, as if he were waiting.

When Norm and Patches finally reunited, everything came to a standstill; it was quite a moving moment.

“He was overwhelmed when he came to pick up Patches, as if he had seen a ghost. And in a way, that was what he had done.

It is not yet clear what Patches was up to during these three years, but it was evident that he was delighted to be reunited with his family.

“We are so grateful that, with the support of our amazing community, we can not only save lives, but we can often help make these special gatherings happen.”

The shelter also said that it is very important for pets to be microchipped, as it increases the chances of a lost animal returning home.