Cat ‘Steals’ Weirdest Things From Neighbors To Give To Mom 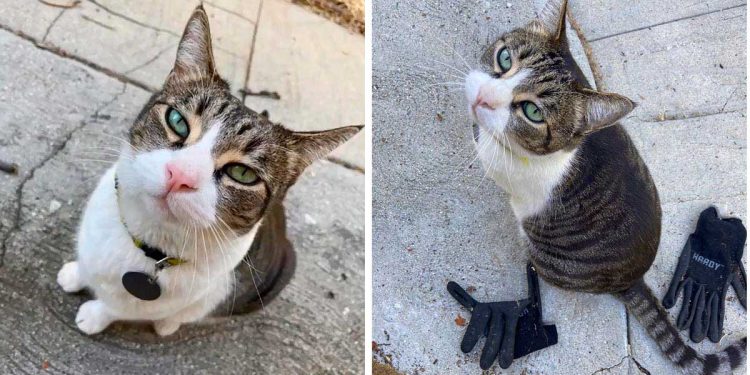 This adorable cat steals strange things from his neighbors’ house to give later to his mom as a sign of love.

This charming kitty named China is a funny threat to her neighbors. The curious and mischievous feline “steals” very strange things from neighborhood backyards and brings them as gifts to its mother. China takes everything from socks to gloves to lighters; nothing is safe from their little claws.

Mónica Vicéns, China’s mother, fell in love with her when a friend told her about a litter of cats in 2013. She took care of the cubs and ended up falling in love with the mischievous feline.

China was the only girl and the youngest of the three. I already had a 4-month-old male cat named Waffles and I fell in love with China so I decided to keep her.

The cat steals the strangest things from the neighbors

When Monica moved into a spacious house with a large patio, the cat became an adventurer and a great hunter; she really enjoyed her new home and the great outdoors, and a new hobby was born, now she steals things from her neighbours’ houses.

It got to the point where we had to keep all the doors and windows closed to make sure she couldn’t get out because she always came in with a living creature in her mouth. She got up every morning like it was her job to go out and support the family.

A post shared by Songs Of My Felines (@songsofmyfelines)

China’s mother did not appreciate the gifts her cat brought home at all and tried to make her understand by preventing her from going out. But China was obsessed with bringing Mom a present, so since she couldn’t look outside, she focused on inside her home.

The woman found socks on her bedroom door and initially thought they were her housemate’s dog, but China was later found in action.

She was making weird meows, so we slowly peeked around the corner and watched her drop the sock near my door. It was the funniest thing we’ve ever seen!

China was finally able to get out of the house and now, instead of live animals, her mother has started finding items as gifts. At first China brought cigarettes, then matches, leaving everything outside the front door. Monica thought it was her partner’s stuff instead.

A post shared by Songs Of My Felines (@songsofmyfelines)

Soon, the woman started noticing more gifts at her garden gate and became a little suspicious of where they came from.

A few days later, other articles started to appear and that’s when I understood. She had broken into my neighbor’s garden and wouldn’t stop. I would put everything in her garden as soon as I dropped it and she would bring it back right away, like, ‘Hey! I thought I gave you this! So I had to wait until the end of the day to return all the items.

China has a routine that her mother has managed to identify, as soon as she leaves the house, she takes a few laps in the grass of her favorite place, then goes in search of objects that she will finally leave at the door of his mother.

Monica told what happened to her friends who didn’t seem to believe what she was saying so she decided to set up a camera outside the door to catch her in her misdeeds and upload the videos to her Instagram accounts and TikTok.

Luckily, China’s neighbors didn’t seem to mind her antics and Monica decided to set up a “return box” so people could claim their missing items along with a note explaining what was going on with her phone number and his email address in case you want to see the videos of China’s shenanigans.

I couldn’t cover her anymore, so I went clean. I left the neighbors a bag with their things and a note explaining what was going on.

But China knows that her mother loves her unconditionally and wouldn’t change anything about her, and that this love is totally reciprocated.

[She] loves rolling around in the dirt, chasing, stealing, knocking things off tables and teasing me as much as she can and I love her to death. She makes me laugh every day.