A Cat Becomes A Star By Stealing Hundreds Of Toys 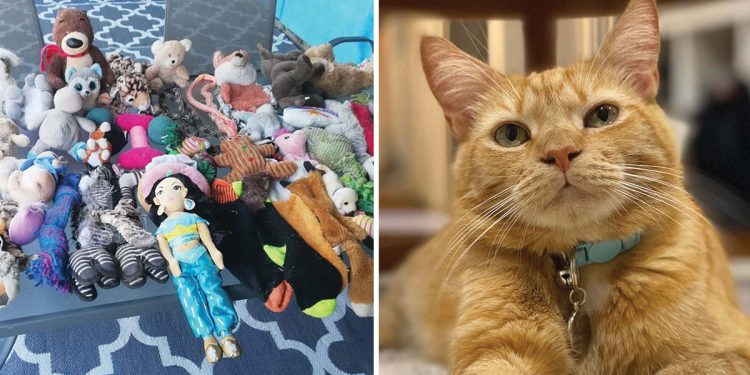 This mischievous cat becomes an internet star for stealing hundreds of toys from her neighborhood.

This charming cat thief has become an Internet star, and it’s all thanks to his adorable crimes. In March last year, Kay McCall and her husband moved into their new home in Ferny Hills, Australia when a ginger cat jumped over the fence to be petted by the couple and quickly became a frequent visitor .

One day the McCalls noticed a few toys in the back yard, and then another toy appeared in the front yard. The couple didn’t know where they came from, but it didn’t take long for them to discover that the feline visitor was responsible for the toys they frequently found in their garden.

Cat becomes a star by stealing hundreds of toys

He brought several weird socks, he brought a shirt from school… he brought a lot of toys. He brought a beautiful little Peter Rabbit… I have a theory he had a hiding place somewhere. After a while we had just accumulated a ridiculous number, literally an entire table full.

The feline named Kylo continued to bring gifts to the couple, so after a while Kay decided to post the many loot of the cat nicknamed “Pirate Kitty” on a local Facebook group.

Many locals saw the post and said they too had been visited by the kitten or even recognized one of its treats.

Finally, Kay managed to find the family of the cat thief and discovered that they had a house. His humans tried to keep him at home, but obviously Kylo always found a way to bypass security and get out to commit his petty crimes.

But just before Christmas, the cat’s family contacted Kay to help find a new home for Kylo, ​​as they couldn’t keep the kitten safe.

Fortunately, a woman named Ingrid Moyle, who has been following the feline’s adventures, said her family had experience caring for and adopting animals and decided to take care of Kylo. In his new home, the feline is not allowed to leave the house, his transition to an indoor cat was a slow but successful process.

Ingrid has a very, very large box of toys in different sizes and shapes, so just throw that toy box downstairs in the living room and let the magic happen.

There’s a mix of stuffed toys, stuffed animals, feathers, things on sticks – any of those things… So we leave it there… and during the night we hear ‘clan, clunk, clunk” up the stairs. He comes and stands by the bed and says “meow, look what I got from you”, then he comes out and gets another one.

Of course, despite already being a house cat, Pirate Kitty continues to entertain his fans on the internet. Ingrid always shares photos and stories of her exploits in the community group and on her Facebook page.

For their part, Kay and the other families visited by the mischievous kitten are now visiting him in his new home. Kay assures that Pirate Kitty has given the community a point of joy amid the exhaustion left behind by the pandemic.

There was actually a feeling that he was the community’s pirate cat.