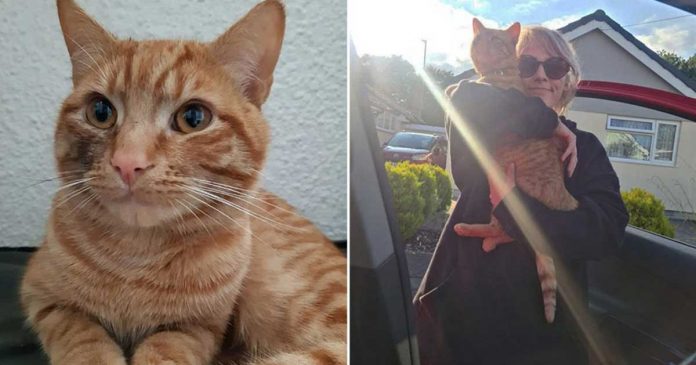 An adventurous cat that disappeared from his home, walks for more than 38 km, until he reaches his hometown and decides to visit an old neighbor

The two-year-old red-haired kitten named Cupid disappeared on December 27 of last year, leaving his family in great distress. Cupid spent the whole day in his usual areas, but when it was time for lunch he did not show up, leaving everyone very worried.

India Redman, a resident of Bournemouth, England, was desperate to find her cat, and she was willing to do whatever it took to find him. What she never imagined was that her kitten had been lost on a long journey in search of treats from her previous neighbor.

Cat walks 38 km to his hometown

Before that, his family began the search, and they put up posters throughout the neighborhood to find his whereabouts. With the help of her father, India traveled around the neighborhood and surrounding areas by car to see if they could find him.

Through social networks they made several publications about the lost cat, as they hoped that someone had seen it, and thanks to these publications, a person told them that he had seen it at home, after three days of searching, but when they arrived it was gone.

The search for Cupid continued desperately, and the good news began to arrive when a woman contacted India over the Internet.

India said, according to Metro:

A lady sent a message with a photo of a red-haired cat that she had seen near her house, asking us to call her if that was Cupid.

Cupid’s mother was excited, and she jumped out of her bed to call the lady, after talking and sharing details they confirmed that it was him.

The surprising thing is that the cat had traveled several kilometers to reach Odstock, Wiltshire, where the woman who communicated with the family lives, and the most incredible thing is that it was Cupid’s hometown, and that it was only two houses from the place from which it had been acquired.

Apparently the kitten had used his location instincts to find his old home, but upon arrival he did not find someone he knew at home, as the old family had moved. For this reason, he remembered a neighbor who gave him sweets every time he went for a walk, and decided to go to his house.

The two met again, but India said the neighbor did not remember it at the time, but it was moving for her to know. Finally, India was reunited with Cupid, but she still couldn’t believe all the adventure that her cat had gone through to get to her hometown.

It’s such an exciting and crazy story at the same time.

India was very happy to have found her adventurous cat, but he seemed very pleased and proud of her independent gait.

The woman thinks that her cat did not return home because she wandered too far away, so she decided to go to another place that was familiar to her. In this way, she came to his birthplace, and she took the opportunity to remember his roots and visit his old friend and neighbor.

After several days gone missing and a 38-kilometer walk, Cupido was back home, safe and sound.

Fortunately, everything ended in the best possible way and, after this great scare, India will be more aware of Cupid’s plans.