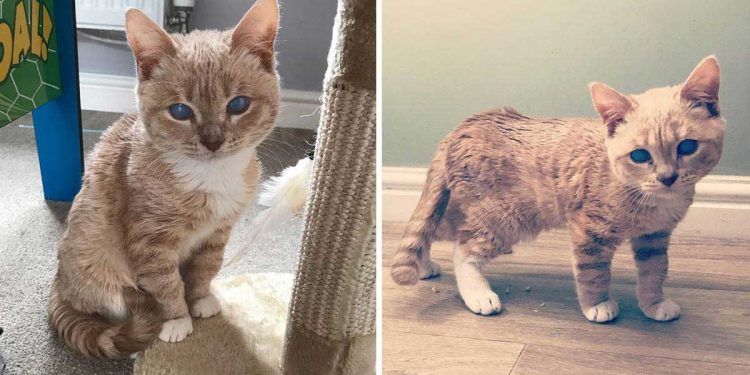 This particular sweet cat with dwarfism looks like a kitten, this genetic condition is only present in one other cat in the world.

Emily Tomlinson works at a veterinary clinic in Wolverhampton, UK, and it was there that she met her cat, who has a “rare” type of dwarfism. Munchie, as this cute cat is called, suffers from a condition that gives him the appearance of a kitten, a condition that has only been documented in one other feline.

Munchie and Emily met in September 2019, when the little one was around 3-4 weeks old. Emily believed he had been abandoned because of his cloudy eyes, but that didn’t affect the adorable cat’s vision in any way.

Emily also adopted a horse, a dog rescued from Romania and two other cats.

This cat will be a kitten forever

A post shared by Munchie the Perma Kitten 💕🐾 (@miniature_munchie_permakitten)

I feel so lucky to have Munchie, he has the cheekiest personality and loves lots of attention and cuddles. He loves playing with his toys.

Just in the last few weeks we have found out he has hypoparathyroidism after collapsing on Boxing Day and spending four nights with the vets on intravenous fluid therapy, his calcium level was 0.52 when the normal range is at least 1.9 it was a miracle.not having a seizure.We only found one other cat diagnosed with hypoparathyroidism like our kitten, who is not in the Kingdom Kingdom. He’s so weird.

Emily tries to give Munchie the best life and wants him to have normal interaction with his foster brothers. She does her best to see him happy.

After having a big scare with Munchie, Emily shelled out £2,500, she says it’s worth everything that can be done to ensure that despite his dwarfism, the little boy has the best possible quality of life.

Munchie does not notice his rare dwarfism, he is a very happy cat and eager to explore the world.

Emily who takes care of her health very closely said:

He has a chronic illness so he will need regular blood tests to monitor his calcium levels and will be on medication for the rest of his life.

A post shared by Munchie the Perma Kitten 💕🐾 (@miniature_munchie_permakitten)

We think she will have a normal life, but since there is very little information available, because she is so rare, we are not sure. It is like a normal kitten, he can climb but he cannot jump because he needs calcium and vitamin D supplements to stay stable.He weighs about 1.7 kg.

Emily comments that taking care of Munchie is not an easy task, due to dwarfism it presents some difficulties, but she does everything she can for his well-being.

I feed him four times a day and no more than 15 grams per meal, he eats like a kitten. When he was really bad, I fed him about 6-8 times a day, including getting up several times during the night for weeks. It was exhausting, but it was worth it, because… after nearly losing him, he recovered and is on the road to recovery.