Moving to another house is stressful not only for people, but also for animals. Cats and dogs, rabbits and rodents are equally sensitive to any change. They can seriously affect their health if you don't take care of your pets in time. 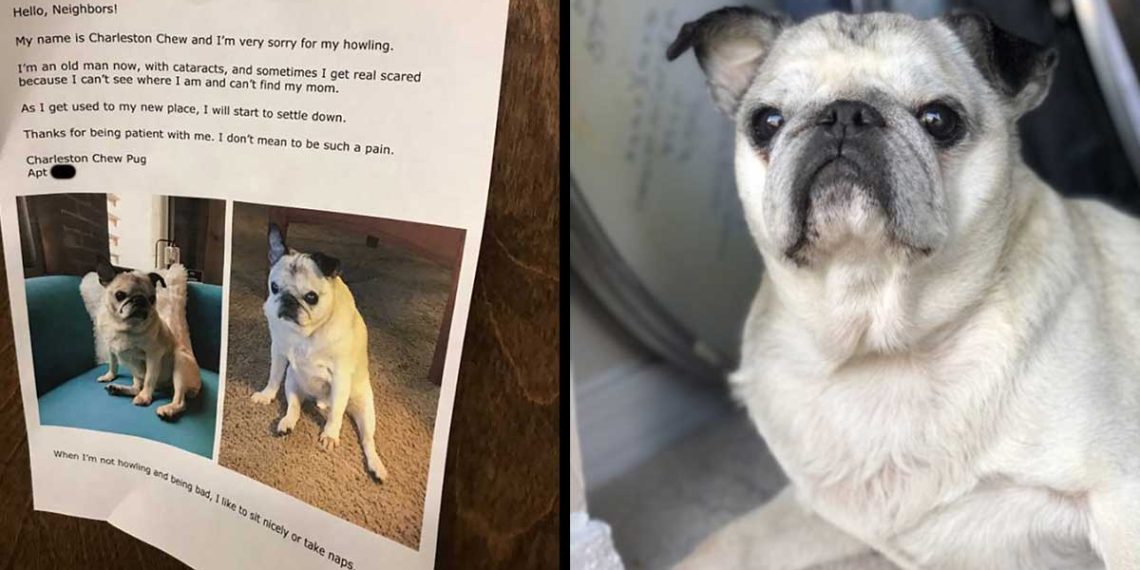 It normally starts with a moan and then escalates into a full-blown howl.

Charleston and Sharla Wilson have just moved into a new apartment. And this 11-year-old pug is a little disoriented in his new home, he already has a lot of worries and he doesn’t take changes well. This means that Charleston – also known as Muffin Toes, Puffins, Chi Chi and Butters – howls with some frequency: at strange things, when he can’t find his human, when he’s left alone… and Sharla, worried about the neighbours, decided to leave them a message. Which went viral.

Well, you asked for it. He smelled a dandelion he couldn’t locate and howls galore ensued… pic.twitter.com/8ACenw95G1

“Hello neighbors, my name is Charleston Chew and I’m so sorry for my yelling.

I’m an old dog, I have cataracts and sometimes I’m scared because I don’t know where I am and I can’t find my mother.

As soon as I get used to our new home, I’ll calm down.

Thanks for being patient with me. I don’t want to be a pest.

PS: When I’m not yelling or misbehaving, I like to sit down and take a nap.”

The note, along with a photo of Charleston, was enough to melt the neighbors’ hearts. Megan, one of the people who lives near Sharla and the pug, decided to share it on her twitter so Charleston knew he could keep screaming, that everything was fine.

It is clear that Sharla never imagined the effect of her note. Not only has she won over the neighbors but has received an outpouring of messages of support and affection for her Pug via the internet, they are interviewed for television programs and a number of dog product brands have given her their all for Charleston.