A Chihuahua Becomes A Guide Dog For A Blind Great Dane

A small Chihuahua cared for by a Californian rescue center becomes the guide dog of a Great Dane, regardless of their differences. 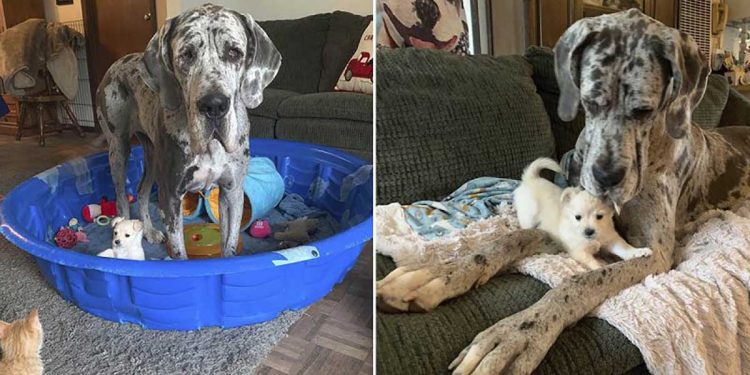 Both in love and in friendship, differences in age, race, color or species no longer matter and sometimes an inexplicable bond is formed. For example, the unlikely bond a Great Dane and a tiny Chihuahua formed after meeting for the first time.

The sweet friendship began when Shirley Zindler, founder of Dogwood Animal Rescue in Sebastopol, Calif., took in Bianca, a little dog, when she was just a baby. Her mother had died in childbirth, so she had to be hand-fed.

Shirley adopted Shelby in 2017 after his owners abandoned him because he had vision issues. He had to undergo four grueling surgeries and use six types of eye drops every day.

Chihuahua is the guide dog of a Great Dane

Shelby first saw Bianca when Shirley was bottle feeding her, and he was watching during the process. As Bianca grew, the couple began to interact more, play games and spend time together, making the special bond between them even more visible.

“Bianca is five and a half weeks old, we rescued her after her mother died in childbirth and the owner contacted us for help. We introduced her to Shelby when I started feeding her at the baby bottle from birth, Shelby would just sit and watch the two of us.”

“As Bianca started to get older, she started to play and bond more with Shelby and that was very special. Shelby is very sweet and kind, but she also has a wild and playful side, whereas Bianca is a bit of a terror!”

Despite their height difference, the little girl never felt intimidated by Shelby, which helped their relationship grow stronger every day.

It’s just that it seemed that each, according to their characteristics, complemented each other, with Bianca serving as a guide and Shelby as a protective guard.

“They clash in size and personality but have become friends – at the rescue center we have a saying ‘big or small’, we love you all! Their friendship is unique, it’s rare to see dogs of different sizes that manage to bond with each other.”

Although Shelby has to use her eye drops every day, she is generally healthy and has taken her new role of caring for Bianca very seriously.

“It’s very important that puppies grow up with a mother and be around other dogs, but Bianca doesn’t have a mother and I think Shelby naturally warmed to her.”

Bianca’s curious personality has made her the perfect guide for the giant, she is great company on his daily walks and visits.

Without a doubt, this lovely relationship goes beyond the limits of friendship and they have become inseparable, and Shirley, their guardian, knows it very well.

Shirley cares for 12 adult dogs at home, 5 of which are her pets; four are part of the rescue project and three are permanent rescue dogs she cares for.

Two years ago, she decided to permanently adopt Shelby, knowing that it was very difficult to find a forever home for her with her vision problems.

Since Bianca’s arrival, the couple have enjoyed the same house and the same patio, where they spend their time walking around and getting to know every corner.

“I love it, it’s always special when you see a sweet bond between dogs and I’m always fascinated by who befriends who, they’re like people!”

But the atypical couple will unfortunately have to separate. Since Bianca will go to a permanent home where she will make new friends and have her forever family.

“I think they’ll both be fine, they’re like kids at camp who spend the whole summer together but break up once it’s over.”

Shelby will likely find another pup and become her watchdog. But he will never forget Bianca, who came at a time when they were needed most.

Bianca was adopted a few weeks ago. Her adopters are delighted and say she is the best dog in the world.

A beautiful story that shows that the bonds created by friendship and love are very strong and ignore any difference that may exist.