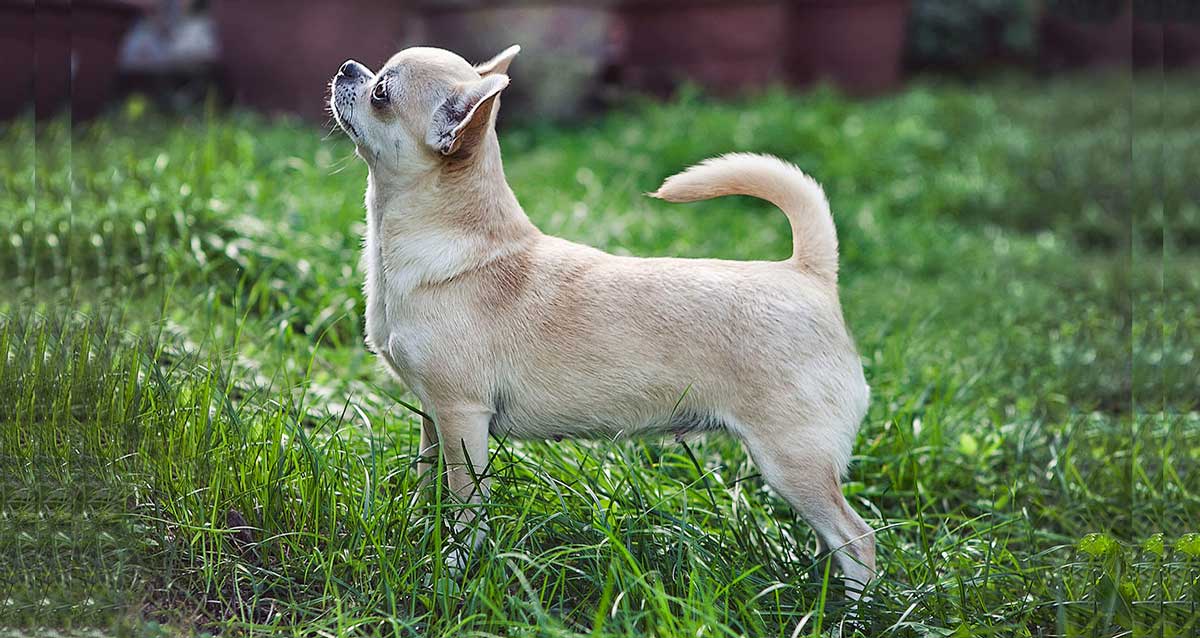 The chihuahua (in Spanish chihuahueño) is a breed of small dog very appreciated for its small size. Besides being an adorable pet, this small dog is an intelligent, restless and curious companion who will offer all his love to those who take care of him.

It comes from Mexico, more precisely from Chihuahua, the state where it was first discovered and its meaning is literally “arid and sandy place”. Read on to learn all about the chihuahua dog. It was captured and domesticated by the indigenous people at the time of the Toltec civilization, today we can find figures of a dog who lived in Tula, very similar to a current chihuahua.

For the time being, representatives of the Chihuahua breed did not particularly stand out among the large family of dogs. But the time has come when these little dogs have skyrocketed to the peak of popularity. It has become fashionable to appear in public places with such a funny dog ​​in her arms.

Among their owners there are many public people, pop stars and movie screens. Oligarchs and politicians also often become the masters of Chihuahuas. However, this does not mean that ordinary people cannot have such a cute and very loyal dog in their home, although the price of puppies is far from small. The main thing is to properly care for her and keep her in proper conditions, then she will thank you with her healthy appearance and devotion.

Physical appearance of the chihuahua

As we have already discussed, it is a small, compact and fast-moving dog. Its measurements up to the cross vary between 15 and 25 centimetres although some can reach 30. In addition, they generally weigh between 1.5 and 4 kg. These measures can vary when we find the two types of chihuahua dogs that differ fundamentally in their size and in some physical aspects:

The apple-headed chihuahua: It is the most common, its head has, as its name suggests, a shape similar to that of an apple which gives it a soft and neat appearance. It has two large separate ears, almost always in an upright position. Unlike a big head and bulging eyes, his body is small and thin. At the end of his body we find a small tail that turns on the back.

The stag-headed chihuahua: it is a little larger than the previous chihuahua. The shape of the head is more elongated and, in some cases, recalls that of a small deer. They are a little bigger and more stylish although they still have a delicate and soft appearance that we will fall in love with.

In addition to the physical characteristics, we are also faced with two different types of fur:

The Chihuahua can be of an infinity of colors like white, brown, black, chocolate, cream … In addition to being tricolor, with lines and speckles.

Character and temperament of the Chihuahua

The chihuahua does not have a defined personality typical of the breed and that is because according to his education we can speak of a tender and loving dog or of a somewhat malicious and cunning breed. It is a very intelligent and observant dog who likes to get away with it. It is a very courageous and devoted dog despite its small size. He is very devoted to the family and is always alert and agitated, vigilant against any intruder.

Sometimes they can show jealous attitudes towards the relationships of those who consider their owners, although this is usually an easy problem to deal with. The chihuahua does not seem to be aware of its small size and can face people or large dogs just to defend those it wants.

The chihuahua will show dedication, in general, to the person who takes care of him daily and that is that he is a very affectionate dog who will ask you for attention throughout the day. In general, it is generally wary of strangers, it is a territorial dog and possessive with its owners, but it generally does not show violent attitudes. He is a curious dog who will easily accept affection and care.

The Chihuahua dog does not always accept the company of other pets, although in general it tends to live beautifully with dogs of the same breed or size. To promote a sociable dog, he must start the game with other pets, from the age of puppy, even if it does not matter if we start their education late, with patience, we can achieve great goals .

We can say that the Chihuahua is in good health. The average life expectancy of these decorative dogs is 12-14 years, but there are also long-livers who managed to live up to 20 years or more. It all depends on the care, nutrition and maintenance of the animal. A caring owner should know the diseases that are most often found in representatives of the specified breed:

The owner must monitor the timely vaccination of the pet. It is also necessary to show the dog for preventive examinations to the veterinarian. With such careful care, many health problems can be avoided.

It is not at all difficult to care for such small creatures of nature as a Chihuahua. Due to their small size, dogs are ideal pets that can be kept in an apartment, even in the smallest one.

The very first thing to do when buying a puppy is to determine its place in the house. It should be a non-passable, draft-free, warm enough, but not hot place. Place a mattress there or set up a bed. For small breeds such as Chihuahuas, a beautiful house can be purchased. On its territory, the dog should feel protected, if it went to rest in its place, do not disturb and do not forcefully pull it from there.

A Chihuahua, having run from room to room several times, fully satisfies its physical activity needs. But it is unacceptable to lock the dog in a room without walking for several days, or even weeks. The Chihuahua loves walks in the fresh air, a loving owner should not deprive them of daily short walks, during which the following rules must be observed:

Chihuahua hair care is not difficult, you just need to take into account the difference in caring for short-haired and long-haired representatives of the breed. The difference lies in the time that the owner will need to spend on grooming the coat.

Long-haired dogs are combed 4-5 times a week, and daily combing will not hurt. They molt twice a season. During this period, combing the wool every day is mandatory.

Brush smooth-haired dogs twice a week. During molting, combing should be done at least four times a week.

Hygiene procedures are carried out regularly and on time, they are practically the same for both long-haired and short-haired varieties:

Chihuahua is characterized by excessive tearing; therefore, such dogs have tear paths near the eyes. You need to regularly wipe your eyes with a tissue dipped in a special liquid. You can buy it at any veterinary pharmacy. You need to carry out this procedure with the eyes twice a week.

Chihuahuas need warm clothing. Especially in the autumn-winter period. Specialty stores sell all kinds of clothing and footwear for dogs. The owners of these little pets buy clothes for them not only to keep them warm during walks, but also for fashion decoration. For the holidays, Chihuahuas put on a carnival costume, in the evening in the room the dog is dressed up in pajamas and slippers, for a walk in the dog’s wardrobe there are jackets, overalls, boots, etc.

The Chihuahua adapts in moderation to the amount of exercise offered. They are generally very energetic and very enthusiastic when playing, but they do not need long walks, half an hour a day is enough.

It is recommended to take the Chihuahua with a harness instead of a leash, given the fragility of its trachea.

Decorative lap dogs in most cases are sweet tooth, they like to bite, beg for food from the owners when they eat. You should not follow the lead of voracious pets. Their nutrition must be controlled. An unhealthy diet can lead to health problems such as obesity. The stomach can also suffer from harmful foods.

To prevent such troubles from happening, follow the following rules for feeding the Chihuahua:

If you decide to feed your dog a natural food, check out the lists below. These recommendations will help you create the right diet for your pet.

Not every dog ​​owner can take the time to prepare natural pet food. In this case, it is transferred to dry food. This method of feeding has its advantages: it does not take much time to cook, contains all vitamins and minerals, and is balanced.

You need to buy dry food only at trusted outlets that specialize in the sale of professional food. If your dog has health problems, your veterinarian will recommend a special medicated food. In other cases, you should purchase super premium food.

Clean cool water should always be available. It is recommended to install containers for food and water in special stands, so the pet will not be able to turn or move the filled dishes.

Chihuahua training is not difficult, the main thing is to start education from puppyhood. Such a pet does not need special training, but it should know such obligatory commands as “your place”, “no”, “to me”. Also, at six months, the Chihuahua puppy should react calmly to a collar with a leash. While walking, relationships with other animals should be good, although it is very difficult to achieve this from a cocky sneeze.

It is worth noting that the owner of a Chihuahua should not relax, since his ward is distinguished by stubbornness and willfulness. An improperly raised dog can become aggressive, uncontrollable, which will lead to many problems. A strict tone and perseverance during training will have to be used and shown by the owners of sneezes.

Before buying a Chihuahua puppy, you should familiarize yourself with all the disadvantages and advantages of the breed:

The Indians adored Chihuahua dogs. They truly believed that these miniature creatures were capable of healing and performing other miracles. Little dogs even took part in magic rituals. By the way, many modern sneeze owners also believe in the magical abilities of their wards.

The Chihuahua is home to the Yucatan peninsula in America. They were first discovered among the Mayan tribes. Then these animals earned the love and veneration of the American tribes of the Toltecs and Aztecs. Interestingly, the dogs were looked after as if they were deities. Every little pet had its own servant. The servant’s duties included caring for the animal, feeding, the doggie should not need anything. If you look, then the current owners of Chihuahuas are also, to some extent, the servants of their miniature pets.

The name of the breed was determined in 1850. It was then that in Mexico, American archaeologists discovered ancient drawings of small dogs on stones. It happened in the state of Chihuahua. The name was changed a little, it turned out Chihuahua. It was decided to call this breed of miniature decorative dogs.