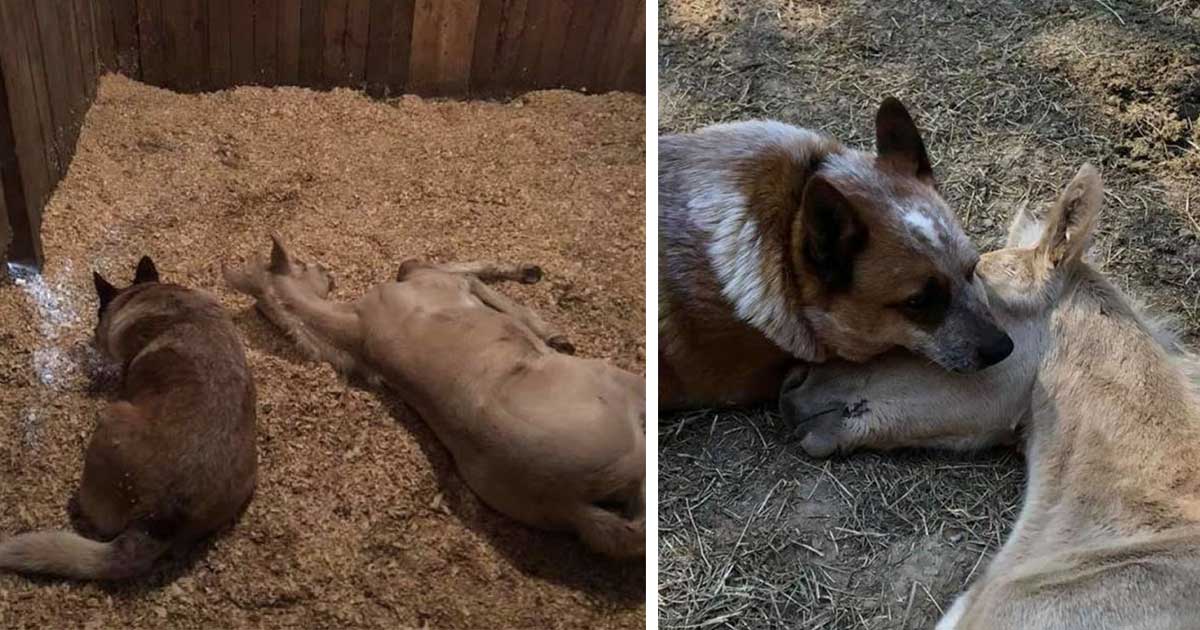 Dogs are our best friends and we know well how deep the interaction between man and beast is in this case. A dog can perceive our moods, and thanks to his affection and sympathy, he also manages to relieve us in the most difficult times. “He’s just a dog” some might think, but his love is able to heal us when we need it most.

The story of the Zip dog, an Australian Cattle Dog, for example, is tangible proof of this. When Zip realized that one of the foals on the farm where he lives with his owners had been orphaned, he immediately did everything to ease the animal’s pain. Yes, that is to say precisely as a human being would do in the face of misfortune.

Despite being a sheepdog, Zip was never too interested in life on the farm, so he never had much contact with the horses on the ranch. However, when he encountered a foal at risk of becoming motherless, Zip immediately embarked on some sort of mission, a “rescue” mission.

This dog comes to the aid of an orphan foal

The foal, in fact, was slumped on the ground, separated from the sick mother and needed to have this maternal presence nearby. The foal, in general, would need its mother at least until weaning, that is to say until about 6 months, but even after, despite having acquired a great autonomy, it will continue to look for its mother. In addition, we humans understand this attachment to parents very well!

Sadly, Tye’s mother fell ill shortly after the baby was born, and despite treatment and all the care she needed, she was unable to recover. One night Swindle, the owner, spent all his time with the mare, trying not to suffer too much. He really wanted to do something for her and save her, but apparently there was nothing else to do. Zip had sensed something was wrong, obviously, as he stayed in the stable overnight, showing his support for the collapsed colt.

“I spent the night in the stable taking care of the mother horse, hoping to be able to help her. Zip stayed with me in the stable all night, the colt was lying down and the little dog was lying next to him. “

It almost seemed that Zip understood the situation and thought, “This colt needs my help!” Indeed, Tye was very sad, completely slumped to the ground, but Zip wasted no time and lay next to him the entire time.

Whenever Swindle went to feed the colt, the sweet little dog was the first to run towards the stable. The lady points out that if he saw the foal lying down, the loving dog would come and lay its head on him.

After six weeks Tye started to recover and from there he grew sane and strong like a horse should. Zip’s help seems to have been indispensable and even today the two play together from time to time. Granted, Tye has already grown too fat for Zip, but neither of them seem to have forgotten anything. Zip, as a grand “father”, was and always will be in time of need!