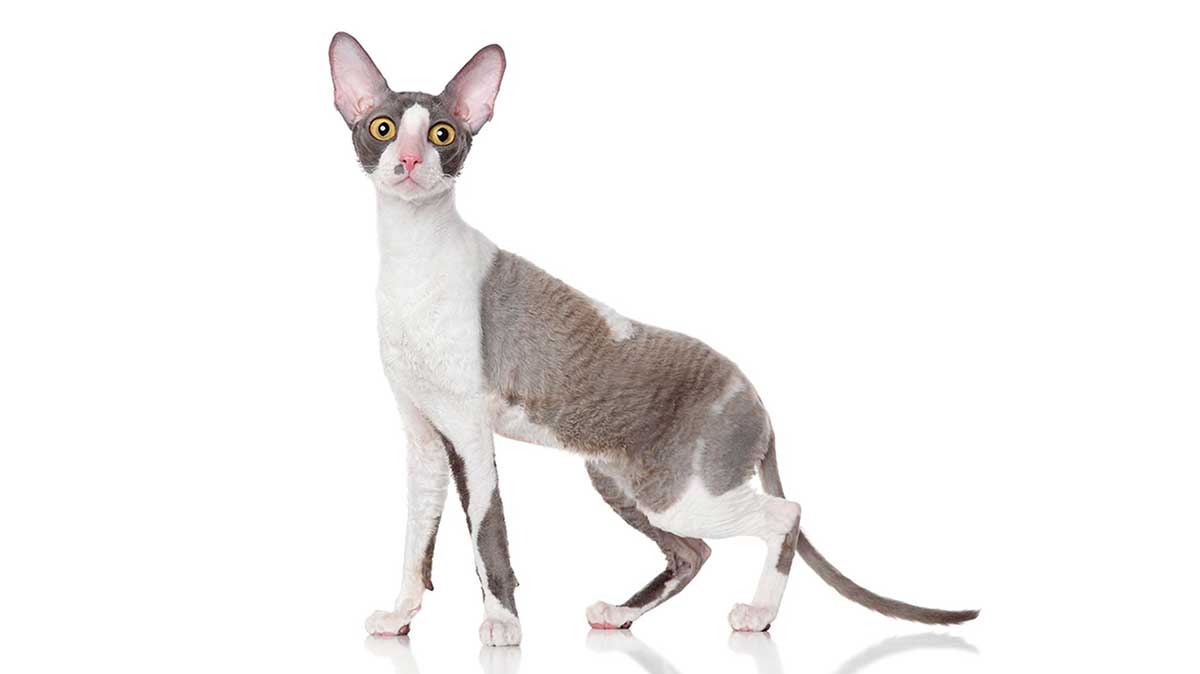 Sweet and affectionate, the cornish rex, a cat with big ears and beautiful wavy hairs that has won thousands and thousands of hearts around the world. And it is not for less, the cats of the breed cornish rex have many advantages.

It is possible that all cat breeds are marked by at least one characteristic that distinguishes them from the others. However, this characteristic is not so obvious in all breeds. In the case of the Cornish rex, it is very easy to be able to differentiate a specimen which belongs to it, and it is that they really have a unique characteristic in everyone feline. A curly coat which we will talk about later.

In ‘ Pets Feed’, we will talk about it and tell you all about the cornish rex cat, its care, its most remarkable characteristics, its size and its origin and some photos of this unique cat. Read on!

Characteristics of the Cornish rex

That the Cornish rex is distinguished by its wavy fur is a fact, but it is not its only striking feature. It is a medium sized cat, but quite elongated and stylized in its body. You may remember greyhounds, which makes them so eye-catching for people used to more robust cats. And it is that all the lines of the body of cornish rex are elongated, the line of the back, up to the head and the muzzle, in addition to the tail and the legs.

Even the ears are larger and longer in proportion than most cats, and their noses have an almost flat profile due to their length. The key to all these characteristics is the elegance of this cat, both when it is at rest and when it is moving.

The coat of the Cornish rex, in addition to being wavy, is very short and has a woolly texture. And one of its most interesting features is that it barely falls, so the care it needs is minimal, and it is not usual for it to swallow the hairs when it grows, which prevents dangerous hairballs from occurring in the stomach. In addition, there is no unique pattern for the coloring of this special coat, which means that it is possible to find specimens of this breed of any shade, and in one or more colors enlarged in any way. either through their bodies.

Finally, it should be noted that the Cornish rex has large almond-shaped eyes with a deep look that can be almost any color. Although they generally combine in one way or another with the color of its fur. An unmatched blend of beauty that catches the eye of any cat lover. So once the breed is known, its charms are hard to resist.

Cornish rex cats are generally ideal companions because they have a docile, loving and attentive temperament. They are also perfect for families with children or other pets, as they get along well with dogs and other cats. These kittens are active and very playful, so they are generally not recommended for sedentary people or with little time to give them the attention they need.

Because of their character, the cornish rex cats do not tolerate loneliness well, so they are not a good choice if they have to spend long periods alone. Likewise, they adapt perfectly to indoor living, regardless of the size of our house or our apartment.

On the other hand, this cat is very intimate, preferring to live inside the house than to go explore outside, which does not mean that he does not like play and activity. The cornish rex is a very intelligent animal, which can be independent at certain times but which also requires large doses of attention, care and affection. It is undoubtedly a complex animal that must be understood in order to achieve what is expected of it.

However, it is a sociable cat in general, and suitable for living as a pet with families of all kinds. He is very good with children and gets along particularly well with them because they are often tireless adventure companions. It is also easy to make him adapt to the tranquility of a house without great fear, as long as he has moments in the day to play and release all his energy.

Another detail that marks his character is that the Cornish Rex is a cat who tends to meow excessively and insistently, all the more reason to educate him from an early age in order to control the least attractive features of his personality. His tone of voice is also quite high, a characteristic that must be taken into account before deciding that a specimen of this breed is as a pet.

The cornish rex cat breed is a truly healthy and robust breed, although somewhat prone to being overweight, so it is recommended not to abuse the diet of our feline companion, as overweight and obesity are potentially harmful to him. Likewise, it is crucial that you train, that is why it is so important, in addition to its active nature, not to neglect the time of activity and games.

A peculiarity of the cornish rex cat is that because of its fur, it is one of the animals sensitive to low temperatures, so we must ensure that our feline is not exposed to the cold, because it could suffer from colds or pneumonia.

The care necessary for the cornish rex cat to be perfectly in terms of health and aesthetics is very basic. You should never forget the frequent visits to the veterinarian to check his general condition, and also to keep you informed of his vaccinations and dewormers.

Regarding the cornish rex cat’s coat and hygiene, brushing from time to time will be enough to remove the rare dead hairs or dirt that can accumulate. As we have already seen, it is not a cat that usually loses a lot of hair, so there is no need to brush it too often.

To keep it clean, it is also recommended to use wipes and pass them all over the body, and to bathe it completely only when necessary and with a specific cat shampoo. Keep in mind that in winter they will need a warm place to rest. Despite the fact that his body temperature is higher than that of other cats, he could get sick due to poor protection of his fur in very cold weather.

Another point to keep in mind to take good care of the health of the cornish rex is that which concerns its diet. It is essential to choose a quality food that always contains all the nutrients it needs. You can also combine dry food with wet food to take advantage of its flavor and properties, but always with care, because wet food usually has a higher fat composition. The Cornish Rex is not a cat that tends to gain weight, but a poor diet could cause it to become overweight, which is very dangerous for animals.

Remember that this is an active and playful animal, the cornish rex will not be happy if it is not authorized to do all the activities it needs. It is also important that a good part of this activity is with the family, as this will be the means of strengthening ties and becoming a perfect pet for all the inhabitants of the house. In addition, thanks to play, it is easier and more effective to be able to educate him, so that these less pleasant behaviors are limited, such as domination or insistence with meows.

In Cornwall, July 21, 1950, the history of a new breed of cats began to be created. Due to the whim of nature, the typical British Shorthair cat has a curly-haired kitten. The handsome man with the “defect” was named Callibanker.

The owner of the farm, where the young curly hair grew up, decided that it was not worth allowing him to spread his genes: it was decided to castrate the cat. Thanks to the veterinarian who dissuaded Mrs. Ennismore from taking this step and directed her to see geneticist Dr. A.K. Judah and breeder B. Stiling-Webb. They recognized the mutation as promising, and advised the cat’s owner to try to breed a new breed.

Nina Ennismore tried to breed the Rex breed. The experiment turned out to be half successful, and in the mid-50s of the last century, all the resulting animals were euthanized, except for the cat Poldhyu. It was bought by B. Stirling-Webb, and he showed the world a new breed, recognized in England in 1967.

In parallel, two kittens, owing their origin to the farm of Nina Ennismore, went from their homeland to the United States, and the granddaughter of Callibanker Lemorne Kav gave the world the Cornish Rex, who made the breed famous.

The American and British lines evolved with some differences: as a result, the long-legged curly American Cornish Rex was recognized by the CFA in 1962.