Couple moves to a Thai island and adopts 15 homeless dogs 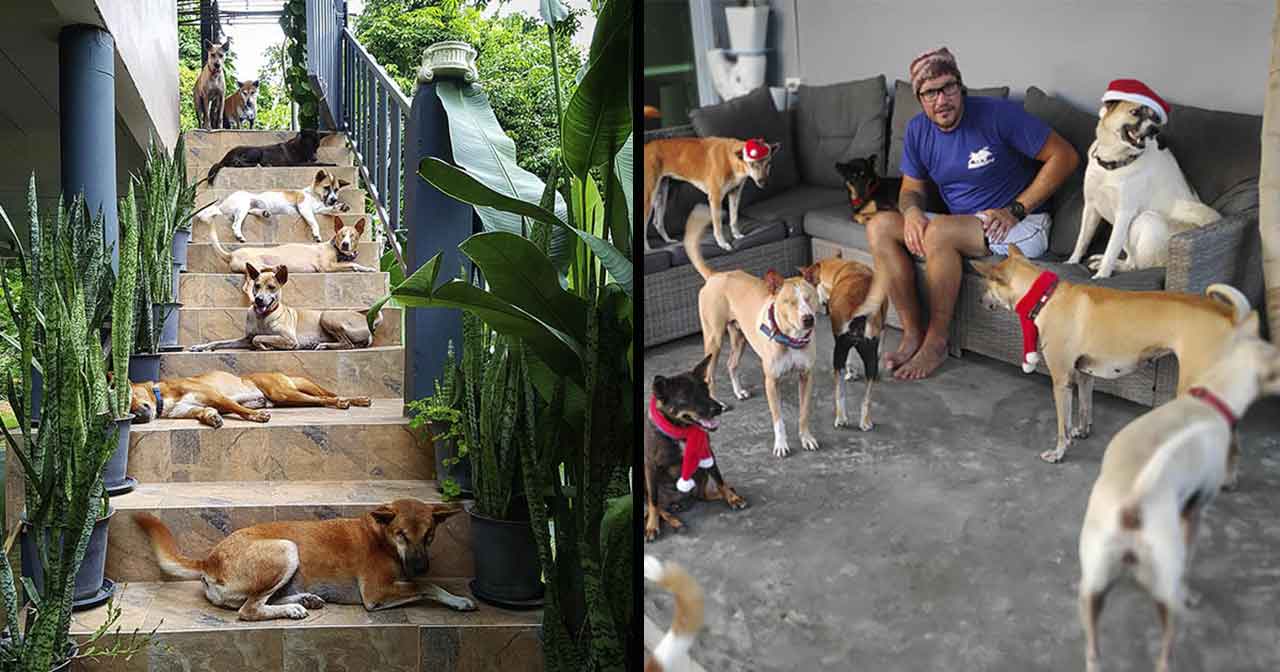 A couple adopts 15 homeless dogs, after they decided to live on a Thai island and help all the animals.

We know that dogs are man’s best friend, but this couple of Lithuanian origin has become the best friend of all homeless dogs that live on Koh Kood Island in Thailand.

They decided to move out six years ago, and they fell in love not only with the island and the laid-back locals, but also with its canines and have since adopted 15 dogs.

The couple made up of Mantas and Rasa, in addition to taking care of their pets, travel more than 40 km to feed other homeless dogs.

Since there are no vets or animal rescue centers on the island, they also provide them with medications and do medical check-ups, according to Bored Panda.

It all started when Mantas and Rasa left their native country to travel around Thailand, but they never imagined that they would like this place so much.

While traveling, they lost their beloved 10-year-old boxer dog named Aibo, he was in Lithuania and it was devastating news.

He became very ill and it was impossible to save him. It was a very difficult time for us, we couldn’t be with him, all we could do was tell him we love him on the phone. We were very devastated.

After the sad news of their dog, they decided to move to this place permanently.

They wanted to adopt a local puppy, but they had noticed many dogs roaming the island; they only understood the phenomenon of homeless dogs, when they stayed to live there.

In addition, they noted that many dogs on the island were not only homeless, but also sick and had small or large wounds. The first dog they adopted was named Zuika, which means bebé Baby Rabbit ’, then they took a trip to their country and brought their dog Rudis.

Now, the couple has already adopted 15 dogs in their home, and each has their own life story or special feature.

Right now, there are 15 adopted stray dogs living with us: 2 blind dogs, 4 with disabilities. They all have their own stories, they have been saved from death, some are puppies, lame, paralyzed, etc.

But, supporting such a large family is not only laughter and happiness, many times difficult situations arise that they have to overcome.

The owner of our house, which we rented for many years, refused to extend the lease. We were literally homeless with our big family, since the owner did not like animals. But now we have a new place in a remote area of ​​the island and we are happy to be with our 15 pets.

But the couple is not only satisfied with helping their pets, they are looking for other dogs on the island that have needs and help them. They want to help everyone, and for this they created Sabai Dog Koh Kood, whose purpose is to make the dogs of the island happy.

They started by giving food scraps to animals, now they already buy huge packages of food to feed them and they also buy necessary medical supplies.

Although the island has a very large population of dogs that is constantly growing, there is not a single veterinary doctor available.

We are not qualified veterinarians, but over time, we didn’t even realize how we learned to deal with serious injuries and gained a lot of medical knowledge about different diseases.

They enlist the help of foreign veterinarians, who not only donate their knowledge, but also help them with food and medicine for the animals.

In this way, the couple tries to help all the dogs that they have not been able to adopt, but sometimes it is a very difficult task. They explain that most dogs have scabies, either demodex or sarcoptic.

They also explain that there are accidents that leave dogs injured and many have infections due to malnutrition, as most only eat rice. Despite this, Mantas and his wife Rasa do their best to help these animals in the best way, but their funds are limited.

They dedicate all their free time to the dogs on the island, and after all this time, there are still no vets, making them the closest thing.

For serious cases like dogs losing limbs in traps, deep wounds or unknown cases, we take the dogs to the mainland in a boat and then drive 100 km to a veterinary clinic or even 700 km to a veterinary hospital. We don’t have funds for such emergencies, so we use our own money and ask people who want to donate for help.

The couple also wanted to do something to curb the dog population. So, in 2015, they visited various veterinary schools, clinics, and organizations to find help to manage the problem on the island.

Fortunately, Khon Kaen University wanted to help them, together they created the first spay / neuter project for dogs, and started with more than 70 animals. Over time, different organizations have been added to the project and currently they have sterilized and castrated more than 1,000 dogs.

For the moment, the couple will continue to strive to help the animals of the island, feeding them and tending their wounds in the best possible way.

If you want to help them and donate, you can get more information here.