A couple adopts a dog because of its resemblance to their other dog, but they had no idea what fate had in store for them 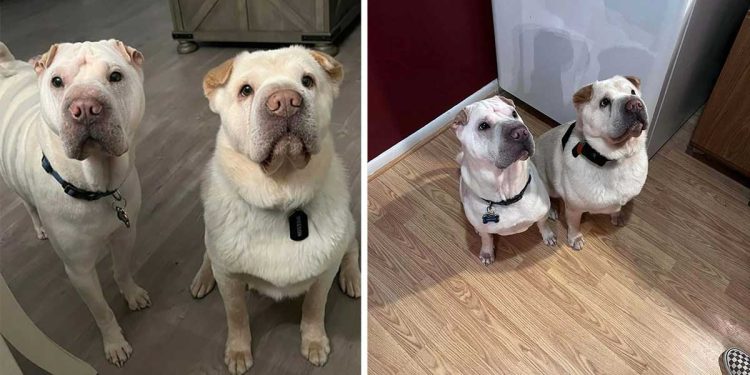 Alyssa DeLuca and Zachary Chin were expecting a normal, calm morning when they woke up, but they didn’t know what fate had in store for them. Alyssa came across a Facebook post from Trenton Animals Rock that changed everything. The post described Wes (formerly Max), a ‘Chow Chow / Shar-Pei mix’ dog who shivered in the corner of his kennel all day at the animal shelter, along with a photo of him with a huge grin on his face. .

After watching the post, Alyssa and Zachary couldn’t help but notice how similar this dog was to Arthur, Zachary’s own dog. As soon as they heard about Wes and saw how much he looked like Arthur, they knew exactly what to do: save him.

Within an hour of seeing the post, Alyssa and Zachary contacted Trenton Animals Rock to ask if they could foster him and possibly adopt Wes from the shelter. The team responded quickly, asking when they could meet him: a few hours later, Wes had been brought home by his new family.

Upon meeting Wes for the first time, the couple were shocked to see him shaking in fear inside his cage. Her heart broke for him immediately. However, it didn’t take long for Wes to start trusting them; once he did, the dog’s vibrant personality kicked in and he became Arthur’s best friend almost instantly.

The two dogs looked so much alike that Alyssa and Zachary often said they were “essentially the same dog with a different source,” despite their noticeable behavioral differences.

Curious to know if Wes was really a Chow Chow/Shar-Pei mix or if there was something else behind his common traits with Arthur, Alyssa and Zachary decided to purchase Embark DNA test kits for the two. dogs.

To everyone’s surprise, it turned out that Wes wasn’t just any dog; he was actually Arthur’s brother! Although they were initially shocked by this revelation, it started to make sense after a bit of thinking: it was no wonder these two were so close even though they had many differences!

The DNA test also revealed that it was not a mix of Chow Chow and Shar-Pei, but rather a purebred Shar-Pei.

For Alyssa and Zachary, saving Wesley isn’t just about saving the shelter dog, it’s also about giving him a life with his beloved brother, reunited with him after years of separation. Undoubtedly, this moving story inspired many around the world, who experienced its power firsthand.