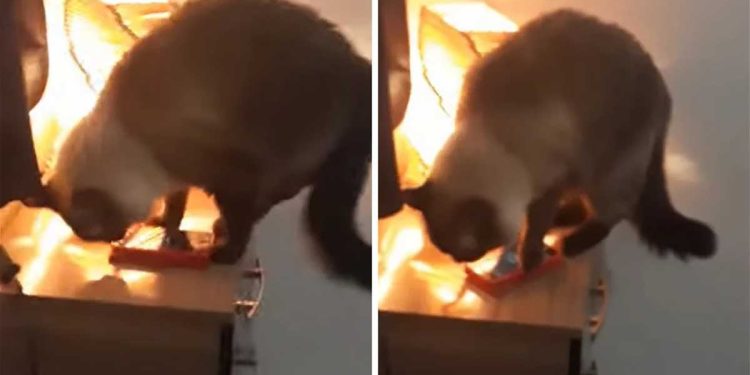 This couple discovers that it was their cat Joaquim who turned off the alarm every morning, and that’s why they were late for work.

Often things happen in our lives for which we can find no reasonable explanation, things that get completely confusing. This funny video is just one example.

Joaquim, a cat who lives with his owners in Sao Carlos, Sao Paulo, Brazil, recently discovered a way to get his humans to stay home for a bit in the mornings.

On several occasions they have been late for work because the alarm has mysteriously gone off and when they wake up it is high time to get up.

The cat turns off his parents’ alarm

Turns out Joaquim was running to the nightstand every time he heard the alarm to turn it off.

As they began to film the phone ringing and vibrating with the sound of the alarm, they couldn’t believe their eyes, the cunning cat ran straight to the phone determined to complete his mission for the day.

Joaquim touched the phone screen with his little paw until the alarm stopped sounding.

The cat’s owner, who has not been named, said:

My partner and I were late for work because the phone alarm didn’t wake us up. We recently discovered that our kitty Joaquim was the one who triggered the alarm.

Right now, it seems cats are waging war on humanity while we sleep. As happened in Lomponten Lomphontan with her cat Achi. While the young man was sleeping, Achi had other ideas.

Lomponten said he decided to install a hidden camera out of curiosity, with the aim of monitoring Achi to see what he was up to while he was at work. But when he watched the nightly recordings, his choking dreams suddenly made sense.

It turns out that Achi likes to sleep on his face, literally. But for Lomponten it’s a sign of affection, he now knows how much Achi loves him.