A Couple Find A Puppy On The Street And A Message On Its Collar Excites Them: “Don’t Steal Me, I Know How To Get Home” 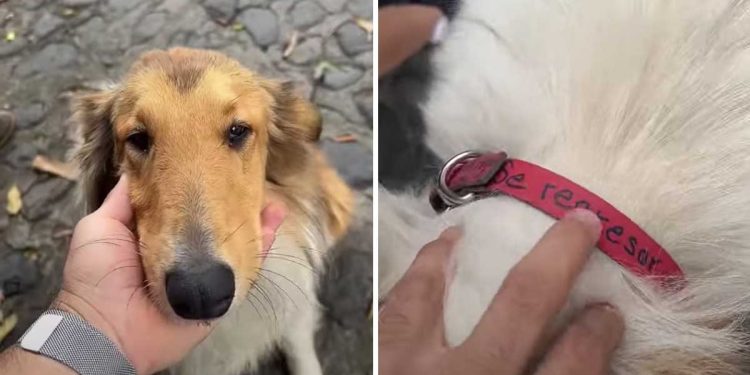 The life of puppies on the street is usually full of obstacles, as they have to manage to find food and water anywhere. That is why there are people who, when they see a lost dog on the public road, immediately go for help.

And that usually happens with some homemade puppies that run away from home and get lost. Some of them don’t have collars to be identified, so they are tentatively adopted by their rescuers until someone claims them.

However, a few days ago a slightly different situation occurred: a couple of tiktoker friends encountered a dog that was walking the streets of their city and seemed disoriented.

According to information from the Capital media, it was Alexis Reyes who posted on TikTok the moment he met the sweet collie.

What this couple didn’t know was that the pup wasn’t actually lost, but was walking away from home but knew how to get back. This is how they warned him by reading on his collar: “Do not steal from me. I know how to get home. I am Makuky“.

Instead of his collar having information with a phone number, the pup’s name, or his owners’ address, it had a message showing that Makuky was completely on his own and knew what he was doing.

It should be remembered that many owners are used to walking their puppies on a leash and that some dogs cannot walk the streets alone because they get lost or have traffic problems.

This surprised most users who were moved by the message he had on his collar and the autonomy this adorable little dog had.