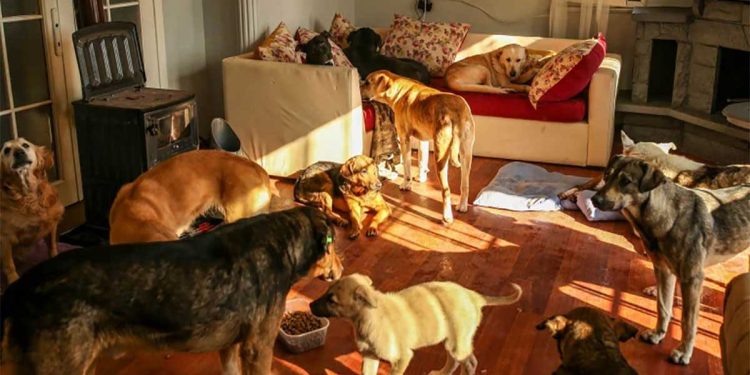 A couple of Turkish heroes managed to shelter, in the midst of heavy snowfall, more than 60 homeless dogs living in a forest

Tugay Abukan and Burcu Yuksel have been feeding homeless animals in their town for several years, trying to ease their situation a little. But recently, the heavy snowstorms that closed the airports and caused great disasters in Istanbul, made them open the doors of their house.

In order to protect them from the cold, the couple took in more than 60 homeless dogs who unfortunately live in the forest of Kuzey. Many of these dogs were abandoned in the woods by their owners and have since received help from the couple.

Burcu said, according to METRO:

Due to the bad weather, we open the doors of our house to all street animals who have no protection and no family.

A couple of Turkish heroes save dogs from the cold

Tugay is known in town as the “Angel of the Forest”, as he has been feeding the abandoned dogs there for many years. This man’s mission is to care for as many homeless dogs as possible, which is why it became his main life motto.

According to the man, in recent years he has seen a steady growth in the number of abandoned pets in the woods near his home. Which complicates his job a bit, but he always goes out to feed the animals in need with great enthusiasm.

When they ask us why we live in the forest, we say: ‘because of the children’. It is their feeding ground and it is there that they are abandoned.

The couple decided to rent a house in the woods to be closer to the dogs, as many are taking refuge in their homes.

The couple’s main job is to feed the dogs, but time has changed their plans and they have been taken in temporarily. Some are sick, others are old, but the most important thing is that the doors of the house are open to everyone.

Although the statistics are difficult to verify, it is estimated that between 400,000 and 600,000 cats and dogs live on the streets of Istanbul.

It’s a never-ending job for the couple, but they insist on helping the animals that are in the forest, as they are more at risk.

Although recent snowfall has forced them to let dogs into their home, they continue to feed the other homeless animals.

Without a doubt, the fine work of this Turkish couple makes them two real heroes, since they only care about the welfare of animals.