Couple Rescue Cat With The Cutest Eyes And Change Her Life 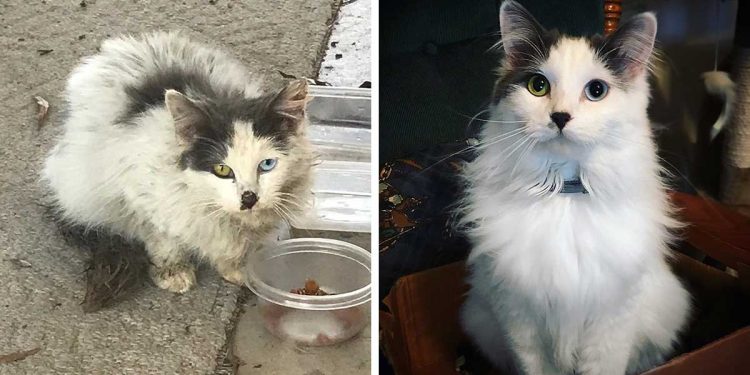 A couple saves a cat that wanders into their house, after gaining its trust, they make it a new member of the family.

A couple have rescued a cat with beautiful eyes, after she was found still outside her home; but first, they had to come up with a plan to gain her trust. Every time Betty H. and her husband went for a walk, they noticed a cat wandering aimlessly around their house, starting in late 2018.

The little cat had very peculiar eyes, she was very shy, she was always dirty and it was obvious that she was hungry, so they wanted to help her.

As the little girl was very elusive, the couple had to get closer little by little, so that she knew that everything was fine.

A couple saves a homeless cat

We started leaving food and water for her to help her, she started getting help from us.

Since then, Betty made sure to feed her three times a day, but each time with the intention of gaining her trust, which was difficult. Several days passed and no one showed up to claim the cat they named ‘Fluffy’, so the couple knew they had to go through the process to save her.

At first she was very calm, once she got used to my presence I started talking to Fluffy while she was eating and drinking. Gradually I tried to pet her. It was really obvious that he had never had an owner.

Although progress had been made, Fluffy could be felt letting Betty reluctantly touch her, but she shivered after a few strokes. With great patience and composure, Fluffy began to gain confidence and began to realize that they were there to help.

His demeanor began to change for the better, from being afraid of contact with humans to craving lots of attention and more petting.

Before she ended her life on the streets, she actually wanted to be petted before eating. I was really surprised to see this behavior.

In mid-February 2019, Fluffy was finally ready, gathered his courage and followed the couple home. They were happy, because they had achieved their goal and thus the beautiful cat would become a new member of the family.

I gave him the first bath which he probably hadn’t taken. He had black spots on his nose and orange residue on his paws which were very difficult to remove. He was missing strands of hair and had huge dirty knots in his fur.

Sweet Fluffy purred as she was placed in a soft towel after her bath, and cuddled comfortably in her new father’s arms.

I have never heard a cat purr so loudly. Later, when we took her to the vet, we discovered she had a number of issues: she had parasites, a stomach infection and mites.

In the days that followed, he was treated for health issues and had his hair cut to remove all the tangles.

His other pet, a cat named Lacie, quickly welcomed the newcomer and they became good companions, Lacie now much more playful. But, Fluffy isn’t far behind; In a few weeks, the little girl went from an abandoned cat to a happy and playful soul.

Fluffy acts like a puppy. He’s the most playful and energetic cat I’ve ever met.

Now the couple are blessed with a handsome member in their family, every time they come home the first thing they see is his pretty face.

When I get home from work, Fluffy waits at the window until I get out of my car. As soon as I open the front door, Fluffy is on the couch by the door, waiting to greet me.

It’s been over a year since the couple rescued Fluffy, and now she’s grown into a beautiful cat with pretty yellow and blue eyes.

Betty claims that Fluffy looks like a dog, as he always waits for any morsel of food that falls on the floor, to roll it up and eat it.

Fluffy is already used to her new life, when she’s not playing games or doing tricks, she loves snuggling up to her best friend, Lacie.

She also likes to be entertained by the sight of birds from the window, she loves her new life as a VIP, as a spoiled indoor cat.

It’s unclear what would have happened if the couple hadn’t rescued Fluffy, but she is happy in her new home, full of love.