Crows Pay A Woman In Thanks For Leaving Them Food 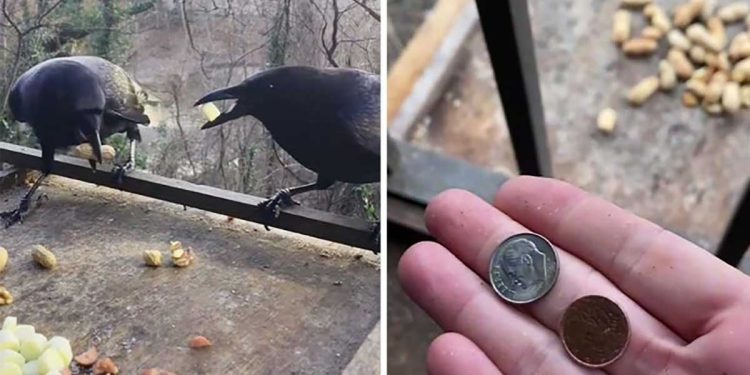 These adorable crows are thanking a woman for leaving them some food outside their house every day.

This woman fan of social networks and videos on TikTok has really hit the jackpot. She loves birds and loves crows, so she usually leaves food for them at her house, and the best part is that the crows leave her little gifts as a thank you.

The woman, who lives in Virginia, United States, posted videos where she teaches about gifts, and other social media users were fascinated by this interaction between the birds and the woman, and they do not never get tired of the thousands of comments and reactions on his publications.

She is happy to document and collect the gifts these birds kindly give her. The crows bring all sorts of small objects as thanks for the treats the woman leaves them.

Crows pay a woman with gifts

She says she has been feeding a small local population of birds since her arrival just over two years ago. Crows passed by her house from time to time and she offered them peanuts.

He also says that since the pandemic and the mandatory quarantine, he has spent much more time observing them and learning to identify the birds that occasionally appear in his neighborhood.

The woman remembers the crows starting to visit her several times a day, quietly perching on a nearby tree, watching her. She tried to talk to them, but they often screamed or flew away. Despite this, over time, they began to descend to eat on the floor. And once the crows felt safe with the woman, they would come almost every morning and call her to give them snacks.

She remembers that the first gift the crows brought her was a small gray pebble, and after that other things appeared near the feeders. Fascinated by her relationship with the crows, she also builds a feeding platform for them.

The woman has an 8-year-old Indian Ringneck named Apollo. The woman’s father raised and rescued parrots and birds, he even had a crow in rehabilitation which his younger sister taught him to say ‘hello’ and ‘I want a pretzel’, she says she has since been incredibly fascinated by these birds.

She recommends anyone interested in befriending crows to do some research on their diet and behavior. It must be remembered that even though birds interact with us, they are still wild animals that have long survived thanks to their distrust of humans.

Crows are amazing and intelligent creatures, they are also very curious and can get a bad reputation; so this bird lover is really excited to see other people interested in taking care of these animals and learning more about them.