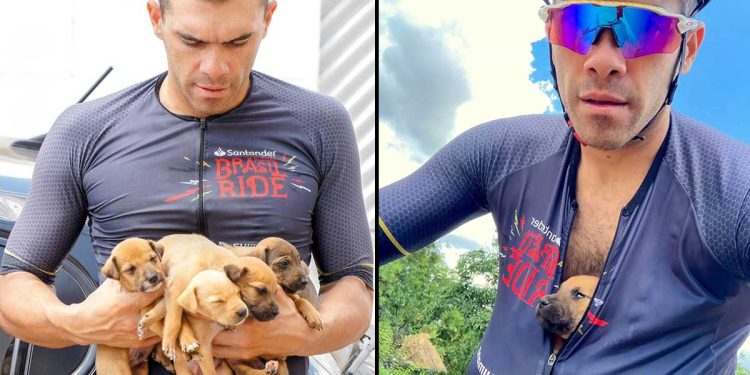 A cyclist who was training on a course far from the city, comes across five abandoned puppies and saves them.

Cyclist Thyago Costa Silva was training with a friend in Brazil when he saw something that caught his eye on the side of a road. As he approached the place, he noticed that there were five cubs abandoned in a deep hole, struggling and trying to get out to survive.

They were in a super remote place, very far away. Someone dug the hole and left them there to die. They were weak and couldn’t escape.

Without thinking twice, the cyclist and his companion knew they had to do something to help and save the puppies.

Thyago and his friend then gently lifted each of the puppies out of the hole, then offered them water from their bottles. They were clearly thirsty and very hungry, but it was clear that all they wanted was to survive this situation.

Thanks to the cyclist and his fellow rider, hope returned to the puppies, and now they had another chance at life.

With no safe transportation for the puppies, Thyago put them in his cycling shirt and began the long journey home.

After a 20 km journey, Thyago and the cubs were at home, safe from any danger.

It was very emotional, I took them home and took care of them.

Once home, the man continued to help the puppies so that they could regain their strength and recover from this ordeal.

Not happy with the great help he gave to the puppies, the man decided to do something else for them and started looking for a home for them. So, Thyago shared the information about the puppies on social networks, and in a short time everyone got what they wanted so much.

They were all adopted by good people who love animals, thank goodness.

Luckily, what started as an abandoned scene on a secluded bike path ended in the best possible way for everyone.

After being saved from possible death, the future of the five puppies is now bright and they will have the best life next to their families.