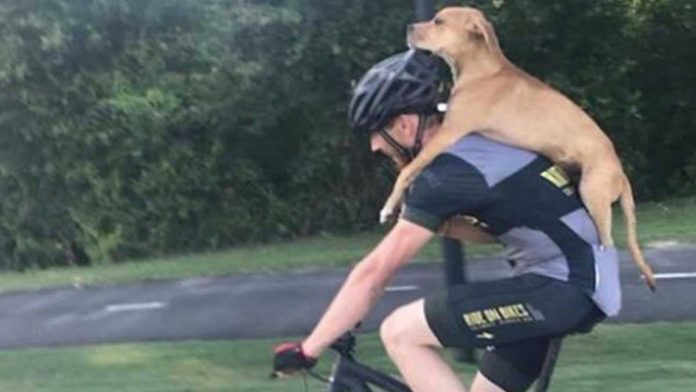 Humans have a strong bond with animals, especially dogs. People have spent thousands of years taming dogs and training them to be loyal and friendly companions. Puppies remind us of children, and adult dogs still retain many of the characteristics of when they were puppies, which can be extremely hilarious. The mutual affection between dogs and humans is evident.

One day, Jarrett Little went out for a long ride with his cycling friends. They were 11 kilometers from the city. They decided to take a short break and at that moment a dog slowly came out of a thicket.

The dog was gentle and a little shy. Jarrett and his friends realized the dog was injured. He was bleeding, he also had abrasions and one of his legs was fractured.

Little and his friends realized that they had to help the dog. They gave him food and water. They knew that if they left the dog on his own he would die. He decided to do something about it.

We stopped to regroup and he came out of the woods to greet us. He was very thin, his ribs were exposed, he had a lot of scratches and a broken leg.

Jarrett lifted the dog onto his back and cycled the bike seven miles back into town. It was not easy to keep the dog in place, but the animal remained calm. The little one seemed to know the man was trying to help him. The cyclist was hoping to find a vet who could see him in time.

Jarrett Little introduced the dog to a woman named Andrea Shaw and as soon as she saw him and found out how he had found her, she fell in love with him.

This friendly puppy was given a second chance thanks to a caring person who took care of him and agreed to ride his bike for an additional 11 kilometers for help.

They named him “Columbo” and took him to the vet where he was admitted for several days.

Then Andrea paid for the vet and took him to his new home, a ranch where he recovered and met his new foster siblings.

If Jarrett hadn’t carried the dog on his back, Columbo surely wouldn’t be the happy dog ​​he is today.

One can only say: THANKS Jarrett Little, You are A BIG! ❤️❤️❤️.

The days have passed and Columbo has grown and is now healthy.

If you want to know a little more about this adorable puppy, you can visit the Facebook page that his new owner has opened: The Adventures of Columbo.

Have you ever made an effort to help a lost or injured animal? Have you ever paid for veterinary care for a dog? What do you think about this ? Let us know what you think in the comment section below. And share this beautiful story!