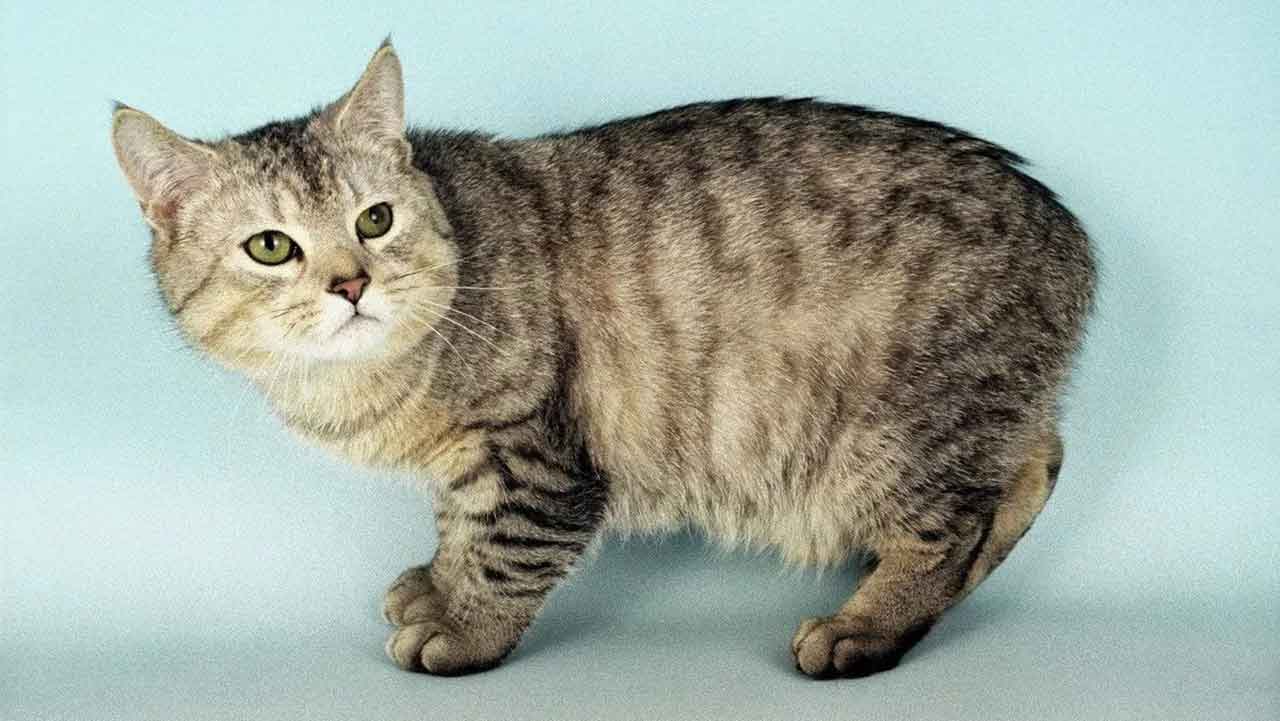 The Cymric cat is a beefy and solidly built cat with a body type similar to that of the British shorthair; He has big eyes and ears wide apart.

The lack of tail is the most characteristic feature of the breed. Its hind legs are longer than the front legs. The Cymric cat’s hair is thick and acts as a layer of padding on the body structure, which gives it a rounded appearance.

Sometimes, Cymric cats can jump like rabbits due to a spinal deformity, similar to spina bifida, associated with a lack of tail. In this breed sheet of ‘ Pets Feed ‘, we will find out everything about the Cymric cat.

The name of the breed comes from the Celtic word Cymru, as the indigenous Celts called Wales. In fact, cats are not related to Wales, and the breed received the name to give it a Celtic flavor.

Description of the Cymric cat

Cymric is a medium sized cat weighing 4 to 6 kg. This is a pet with a stocky, muscular body, with a wide bone. A low belly, straight from the shoulders to the pelvis, a short back line – all this gives the cat’s appearance a rounded shape. The legs are not high, strong, the hind legs are much longer and stronger than the front ones, which makes the Cymric cats good jumpers. Large, massive paw pads between the toes are abundantly covered with hair bushes.

Special attention should be paid to one of the most remarkable details of the appearance of the Welsh pet – the tail. The organ of balance in representatives of the breed is of several types:

Breeding island cats is like playing Russian roulette. It is impossible to predict which kittens will be born as a result of this or that mating. Even if you cross the same type of individuals, this does not mean that the same healthy offspring will be born. Therefore, breeders use different types of Cymric cats when breeding.

Medium in size, rounded head attached to the powerful body by a short, massive neck. On a wide muzzle, large cheekbones, a developed chin, a smooth, slightly convex forehead, and a moderately large nose are clearly distinguished. Medium-sized ears, wider at the base, are rounded at the tips and decorated with tassels. The button eyes are set at a slight angle. The color of the iris is in harmony with the main color. More often there are shades of yellow or green, but there are also blue, and even heterochromia, but quite rarely.

The coat of the Cymric cat consists of two layers: the undercoat and the main coat, so their coat is thick and long. The coat is soft, silky.

The following photos show what a Cymric cat looks like.

Cymric cats can be of different colors and patterns. CFA standards include the following colors:

A deviation from the standard is considered to be chocolate, lavender and Himalayan colors (including those with white spots).

Behavior and temperament of the Cymric cat

This cat breed has historically developed as a hunter, especially for mice and rats. Despite the fact that they have not been catching them in barns for a long time, instincts have not gone anywhere. If you have a cat at home, then you do not need a guard dog.

Cymric cat quickly reacts to any interference, he may even attack someone or something that he considers a threat. However, if he sees that you are not worried, then he quickly calms down.

When he does not protect you and your property from rodents, dogs and other threats, the Cymric cat is the sweetest creature, calm and balanced. This is a playful, cheerful cat who loves to accompany the owner around the house and help him in his business.

If you want to relax, then the Cymric cat will keep you company here too, humming comfortably in your lap. If you want to rest, then she will settle down nearby so that he can see you.

As for meeting new people, then the Cymric cat is incredulous and prudent. To make the kitten more sociable, it is worth teaching it to other people and travel from an early age. Moreover, they often like to ride in a car, and are well suited for people who often move.

In general, this is a very human-centered cat breed, and if you often stay late at work, then think carefully before adopting it. They get along well with non-aggressive dogs and other cats. They love children, but they may suffer from their activity in adulthood, especially if before that they lived in a calm and quiet family.

Despite the fact that they are of average activity, these cats love to play and do it with pleasure. Since they have very strong hind legs, they have no equal in jumping. Now add curiosity to this and try to guess where to look for a Cymric cat?

That’s right, at the highest point of your house. Give your cat the tallest cat tree and you will save your furniture.

Like Manx cats, Cymric cats love water, probably a legacy of life on the island. They are especially interested in running water, they like open taps, to watch and play with this water. But do not think that they come to the same delight from the bathing process.

Another peculiarity is that it communicates with silent and confidential meows because it vocalizes less than the other breeds. The Cymric is a very calm, playful and intelligent cat. It can be somewhat shy and reserved with strangers, and tends to create a closer bond with a specific individual. It is a breed that seems to preserve its childish behavior until well into adulthood.

Unfortunately, the gene responsible for the lack of a tail can also be fatal. Kittens that inherit copies of the gene from both parents die before birth and dissolve in the womb.

Since the number of such kittens is up to 25% of the litter, usually few of them are born, two or three kittens.

But even those Cymric cats who have inherited one copy may suffer from a disease called Manx Syndrome.

The fact is that the gene affects not only the tail, but also the spine, making it shorter, affecting the nerves and internal organs. These lesions are so severe that kittens with this syndrome are euthanized.

But not every kitten will inherit this syndrome, and its appearance does not mean bad heredity. Kittens with such lesions can appear in any litter, it is just a side effect of taillessness.

Usually the disease manifests itself in the first month of life, but sometimes it can drag on until the sixth. Buy in catteries that can guarantee your kitten’s health in writing.

As the lack of tail is a problem similar to spina bifida, reproduction can cause malformations or the death of kittens if they cross the wrong cats.

If you are thinking of letting your Cymric cat reproduce, ask your veterinarian for advice to avoid unnecessary suffering and malformations to kittens.

The hairs of the Cymric cat are long and thick and require daily care to prevent them from thickening and proliferating. You must brush it daily or at least 3 times a week using a long metal spike comb. Needless to say, you should intensify brushing during the moulting seasons, spring and fall. Bathe it once a month to keep the quilted appearance of its cape.

Cut its nails once a week and disinfect her mouth and ears, also weekly. To clean his ears, you can use a mixture of 50% apple cider vinegar and lukewarm water in which you need to moisten a cloth or cotton. Because of his voracious appetite, you must take care of the daily ration to contain obesity, providing it with the proteins and fats it needs.

A good way to keep our Cymric cat healthy and strong is to prepare its own diet. In other words, feed our cat with fresh products instead of pre-prepared foods. This way of feeding a cat is known as BARF Diet for Cats.

Like the Manx cats, Cymric cats are big gluttons, so it is very important not to let them gain excess weight by strictly monitoring the portion size and physical activity of the animal. They are not fussy, so quality ready-made food and a balanced natural diet, to which complexes of vitamins and minerals are usually added, will suit them.

Good nutrition is the key to the health and longevity of any cat. The Cymric cat needs to have a low-calorie menu that is high in protein and micronutrients. From ready-made commercial feeds, drying of the holistic class is suitable, but it is better to draw up an individual diet with a veterinarian.

The Cymric is a semi-long hair version of the Manx cat. Despite its name, which derives from the word “Cymru” (Wales, in Celtic), it is native to the Isle of Man.

Tailless cats are common on the Isle of Man, where reproduction among the island’s cats it allowed the mutation of the gene that eliminates the tail, which had occurred naturally, to spread. The Cymric cat was born in Canada in the 1960s, when the American breeder Leslie Falteisek and the Canadian Blair Wright decided to separate and associate the few Manx cats born with long hairs. After a rigorous selection, the Cymric breed was born in Canada, a name of Celtic origin which means “Wales”, in honor of the Isle of Man where their ancestors come from. The breed is officially recognized only in North America, while in Great Britain it is not yet registered as such, but belongs to the group of manx cats.

As in the case of manx, litters of Cymric kittens can have squat tails of different lengths (classified as rumpy-riser -it has 3 coccygeal vertebrae-, stumpy -some moving vertebrae- and long without reaching normal size-) or lack tail completely (rumpy). Reproduction programs in Canada in the 1960s gave Cymric popularity in the US. Where only animals that have a tail completely are exhibited.