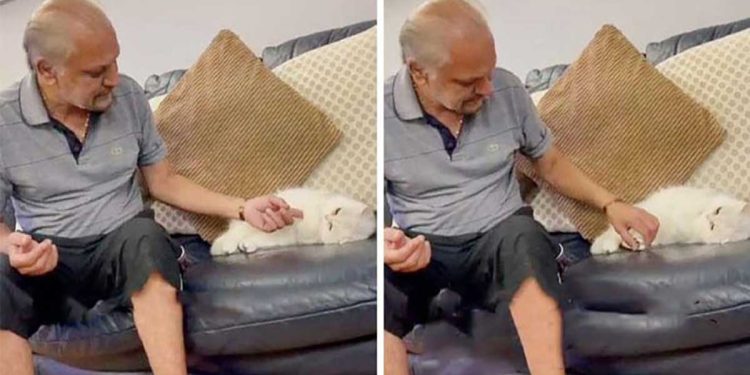 Dad who doesn’t like cats becomes inseparable from the feline his son brought home after saying no.

Shaan Renoo posted a video, beginning with a recap of the times she asked her 60-year-old father, named Raj, if they could have a pet cat. The answer was still an emphatic no, but that didn’t stop Shaan from trying anyway.

The video continues and unexpectedly, several months later, shows Raj chatting to a fluffy white British Shorthair cat named Angie, who had also taken his place on the couch.

In the short video, the man can be heard saying to the feline: “That’s my chair. I want to sit there. I want to watch TV.” The man then politely asks if he can sit next to him.

Raj continues to talk to the feline, proud of the fact that she never bites him, because she loves him, we can even hear him say:

I will always love you. I will play a Whitney Houston song for you every day.

Cat behavior expert Franny Syufy explained in an article for The Spruce Pets why some people avoid cats. Some aspects are physical, such as allergies, which cause the influx of bothersome symptoms. Other reasons are more emotionally related; whether it’s a bad experience in the past or the cat seems cold and indifferent, despite your attempts to interact with it.

They often communicate quite vocally and sometimes even physically, with a rapid snapping of outstretched claws when overstimulated by excessive petting.

Apparently, this couple of friends have accepted their differences. From sharing the sofa to dinner, they seem inseparable.

Dad is normally a quiet, brooding figure in the house. He liked feral cats but not domestic cats, and he avoided going to people who had cats so as not to get scratched.

After months of pestering her mother about a cat, she gave in and they kept the secret from Raj.

We didn’t tell my dad we were going to have a cat until he arrived. The day we got the cat, he walked into the room and I swear on my mom’s life, he was so blown away. I could see he wanted to smile, but he didn’t break a smile.

After seeing the relationship between his father and Angie, Shaan approached him again and asked if they could have a second cat and, as expected, Raj refused, but Shaan did what he did best. and a few days later he brought Tommy, a little brindle shorthair.

He placed the kitten in Raj’s lap, and Raj couldn’t get over his amazement. But a week later, history repeated itself, and although Raj wasn’t as close to Tommy as he is to Angie, they eventually became good friends.

From now on, the couple of cats enjoys their life together and the affection of their grandfather, also doing some mischief and making the happiness of the family and the people who follow them on their social networks.