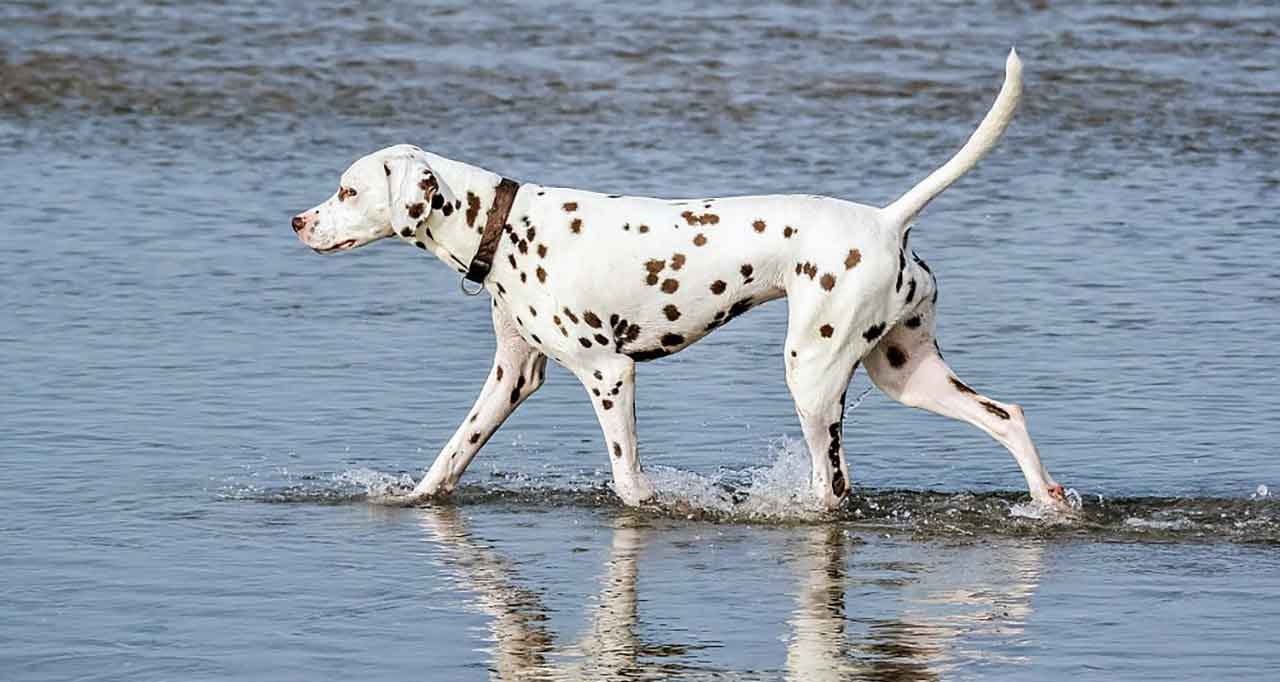 The Dalmatian dog is one of the most popular dog breeds, known for its particular black (or brown) spots on the white coat. It is a very faithful dog, stable and calm, provided that you can do enough exercise to release the accumulated tension.

Each person, deciding to buy a dog, selects it according to his taste and according to his preferences. One needs a guard; another needs a fun companion. If you want to have a friend and a watch dog, opt for the Dalmatian breed.

These dogs soared to the peak of popularity after the release of the cartoon “101 Dalmatians”. Representatives of this exotic breed were distinguished by their unusual appearance. White dogs with a black or brown spots, one could only like.

The historical facts of the appearance of the Dalmatian breed cannot be precisely described. So far, it has not been possible to reliably establish the specific time and place of origin of this type of dog. But some information is still available.

It is believed that the breed of Dalmatians was bred in Croatia. The name comes from the province of Dalmatia, which is located on the territory of this republic. There is speculation that the history of the Dalmatian has been going on for several millennia. The fact is that during archaeological excavations that were carried out in Greece, paintings with images of people along with their dogs were discovered. Animals were like modern Dalmatian dogs.

The main purpose of the breed is difficult to determine. Throughout the entire period of the formation of the breed, the Dalmatian served as guard, shepherd dog. These dogs were also used as circus artists, it was not too difficult to teach them different tricks. Dalmatian dogs were the favorite pets of coachmen. When the cabmen left their horses, they were guarded by white dogs with black or brown spots.

It is assumed that the Dalmatian occurred as a result of crossbreeding of Dalmatian indigenous dogs, Great Dane and Istrian Coarse-haired Hound. Now it seems that the Dalmatian is a sweet, good-natured animal. But many years ago, the representatives of the breed were quite aggressive. Temperament is still preserved in the modern Dalmatian dog.

Used the breed as a shepherd and hunting. Since 1955, they gained the status of companion dogs. The twentieth century brought the Dalmatian immense popularity.

Physical characteristics of the Dalmatian dog

The Dalmatian belongs to large breeds. its movements are swift, the dog is strong and hardy. It is not difficult for it to travel long distances. The growth of adults is 55-60 cm, weight 25-30 kg.

The medium-sized head is set on a not too long neck. Ears are hanging, spotty or with a marble pattern. Eyes can be light or black-brown, very rarely blue. The black-spotted variety of the Dalmatian has a black nose, while in brown-spotted it is always brown according to the standard. The lips are not sagging, pigmented. Jaws are powerful, scissor bite.

The physique is athletic and the back is level. The limbs are smooth and muscular. The step is wide, long. The length of the tail to the hock. If the dog is calm, it keeps its tail down. When moving and excited, it lifts it up. According to the standard, swirling and vertical are not allowed.

The Coat is short, thick and is hard to the touch. This dog sheds throughout the year. It is worth noting the cleanliness of the Dalmatian, it does not have a specific dog smell.

Regarding the color, the Dalmatian is divided into two varieties. Moreover, in both cases, the main color is white, against its background the spots are round, clear, they are evenly distributed throughout the body and should not merge. The sharper the spots, the more appreciated the dog.

Character of the Dalmatian dog

Dalmatian is a friendly dog, confident and very active. He usually enjoys swimming, running and exercising with traces and curiosity. He gets along with other dogs and other animals. In general, these dogs are also friends with strangers, although they are not as social as the Labrador Retriever or the Golden Retriever. Some, however, are reserved for strangers, but innate aggression is a very unusual feature in the breed.

They are perfect for active families who practice exercises with their dogs and want a faithful and energetic companion by their side. However, inside the house, the Dalmatian is a calm and serene dog, able to relax without problems.

These dogs are perfectly tolerant of children who know how to respect them and take care of them as they deserve, but do not always react well to the tail or ear tugs. For the same reason, it will be important to teach our children to play properly with the Dalmatian dog: always out of respect and affection. The education of the dog will obviously be very important to get a more affable, relaxed and tolerant character.

With proper care, a Dalmatian can live 10-12 years. It is necessary to carry out vaccination, treatment against parasites and preventive examinations in a veterinary clinic on time. Basically, they have good health, but there is a predisposition to some disease:

Particular attention should be paid to urolithiasis. Representatives of the breed are especially predisposed to it. The fact is that in such dogs the level of uric acid is much higher than in other breeds. Because of this, urine blocking often occurs. To prevent and prevent the development of urolithiasis will help a diet in which the diet of the dog will be low in protein.

The Dalmatian has another condition regarding health, we are talking about congenital deafness. It affects 10-12% of puppies. Therefore, before buying a puppy, be sure to check it for deafness, otherwise you risk raising a pet that does not hear anything, it is very difficult.

It is not practical to subject puppies to too much exercise. The adult Dalmatian is an incredible breed of resistance, able to travel at a moderate pace almost indefinitely.

More than two hours of daily exercise in adulthood are recommended to stay in shape.

His hunting instinct pushes him to run, jump and climb, so his owner must remain vigilant to ensure his safety.

Caring for a Dalmatian is not difficult. All because of the cleanliness of the breed. Despite the white color, these dogs almost always look neat and clean. Their coat has the ability to repel dirt well.

Keeping such a pet is better in the house. In an apartment, since this is an extremely active breed, we should not forget that the Dalmatian need daily walks. During walks, let him run loose, jump, chase the ball in the company of other dogs or children.

In the house the pet should have different toys, long-playing bones. Only under such conditions the dog will not spoil household things.

From the first days when the puppy got into the house, teach him the rules of behavior. The Dalmatian should have its own place with a couch and containers for food and water. Also, from a puppy’s age, the pet must patiently endure all the hygienic, cosmetic procedures outlined in the list below:

It is enough for an adult dog to have food twice a day at the same time. It is recommended to feed them with natural food. The fact is that Dalmatian often has an allergic reaction to dyes contained in dry food. If you still decide to buy ready-made food, it should not contain many dyes and various additives.

Regarding natural nutrition, the Dalmatian can be called omnivores. So, the owner should carefully monitor that the pet does not eat something forbidden, such as a spoiled product or a product with spices. Nutrition should be balanced, with enough protein, vitamins and minerals.

Sometimes a dog can arrange a fasting day by refusing to eat. In such cases, you do not need to force it to eat, palming something appetizing, there is nothing to worry about in a one-day refusal of food without the appearance of vomiting and diarrhea.

From an early age it is necessary to engage in education, socialization and training of the Dalmatian. He is smart, but can be stubborn and naughty. Therefore, it is important that the dog feels the willpower and firmness of his master’s character. Training itself should be consistent and solid.

Unacceptable aggression, physical punishment on the part of the owner during training. The Dalmatian dogs are very sensitive. Therefore, rudeness can create an invisible barrier between the pet and the owner. If you can’t find an approach to the dog on your own, seek help from a dog handler. The specialist will teach you how to handle the Dalmatian and help you take training courses.

If you are used to lead an active lifestyle, if you like frequent walks, hiking, cycling, the Dalmatian will definitely suit you as a pet. But before making the final choice, it is worth familiarizing yourself with the main advantages and disadvantages of the breed:

• Best suited for families with older children than toddlers.
• Dalmatian should be trained properly and gently.
• This dog may suffer from separation anxiety if it stays too long alone.
• Well-bred Dalmatian puppies are expensive.
• Dalmatian needs a lot of daily physical exercise and mental stimulation.
• May be aggressive towards other dogs if not socialized from an early age.
• It loses a lot of hair throughout the year and even more in spring and autumn.
• Dalmatians are prone to hearing problems and puppies must be tested for BAER.