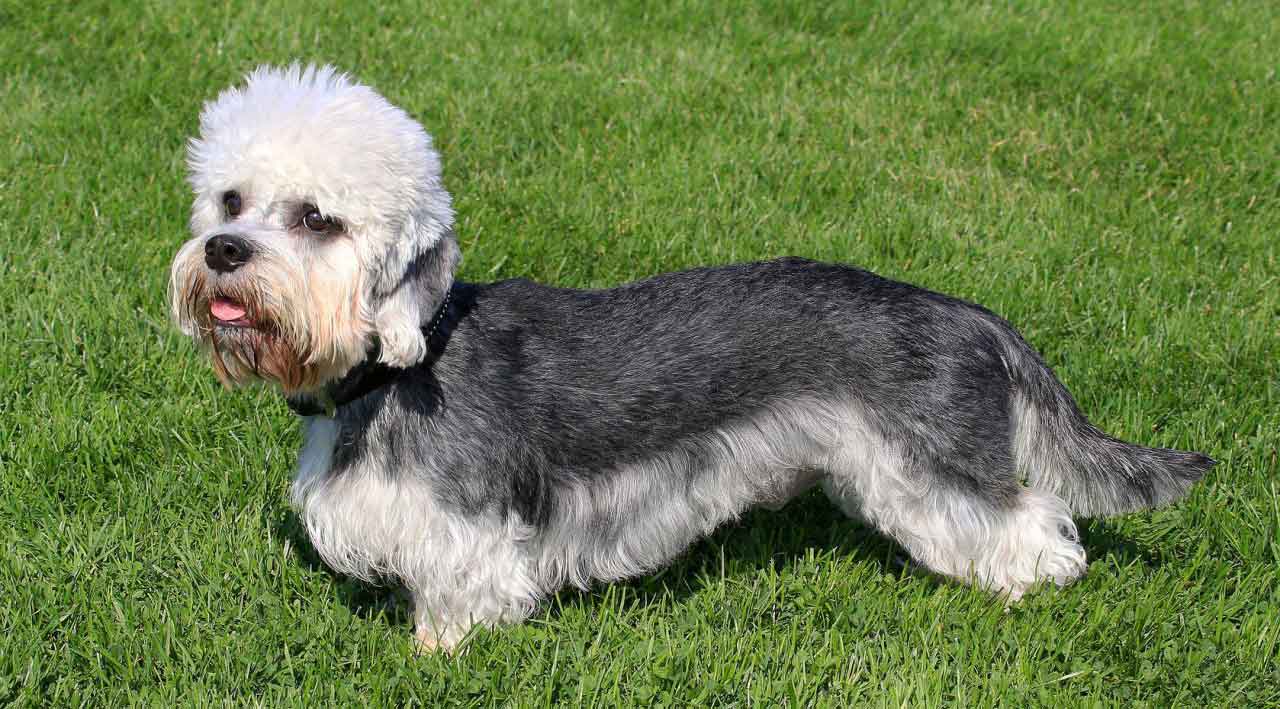 Sharing the same dog breeds family as the Australian Silky Terrier or the Yorkshire Terrier, the dandie dinmont terrier is another of the breeds that make up the large family of terrier dogs. These small, long, leafy hairs are one of the oldest breeds in the Great Britain, where they came from, which is why, after so many years of history, and having shared a house with many families. Nobles of the time, it was a shame that the Dandie Dinmont dogs were classified as an unpopular breed of dogs, as it is estimated that around 300 specimens are born each year in Ireland and the United Kingdom.

This small dog has large expressive eyes and a distinctive, silky and soft coat on the head. The double coat of the body includes a soft lower coat and a harder upper coat, which can be pepper or mustard in color.

The Dandie Dinmont Terrier belongs to the terrier family. This breed, originally from Scotland, has won the hearts of many lovers of small dogs with an unusual appearance.

Do you want to know more about this breed which despite its age is so unknown? So read on, because in ‘ Pets Feed ‘, we’re all going to detail about the dandie dinmont terrier.

For the first time, information about the Dandie Dinmont Terrier appeared in the sixteenth century. This is one of the most ancient branches of the terrier breed. It appeared thanks to the breeders who bred the specified species. The genes of old Scottish terriers were used in the work. Crossbreeding was carried out between Skye terriers and Bedlington terrier dogs.

Work on the formation of this terrier was carried out in Scotland and ended in the eighteenth century. This country is considered the birthplace of the breed.

Initially, these small dogs were bred by gypsies and Scottish farmers. These pets were supposed to hunt rats and other rodents. They also announced the arrival of uninvited guests with loud barks.

Then more experienced breeders took up dandie terriers. In the course of breeding, they tried to create hunting dogs with small dimensions, lightning-fast reaction, speed, developed sense of smell and courage.

The goal was achieved. Dandie Dinmont Terrier has become an excellent helper during the hunt. He easily hunted such game as badgers, otters and other burrowing animals. It is also worth noting that rats will never live in the terrier’s habitat. From time immemorial, the dog has been fighting a merciless fight with them.

The Dandie Dinmont Terrier was not very popular. But after the publication of the novel by Walter Scott, in which the main character contained a whole pack of dandie terriers, the popularity of the breed skyrocketed.

In the novel, the Dandie Dinmont dogs were described so enticing that many readers immediately wished to have such a dog. The population has increased dramatically not only in Scotland, in England. In European countries, representatives of the breed have also gained popularity.

The modern Dandie Dinmont Terrier has been retrained from hunting dogs to decorative ones. This species is considered the rarest among the rest of the terriers.

Characteristics of the Dandie Dinmont Terrier

The dandie dinmont terrier is a small dog, weighing between 8 and 11 kilograms, with its height at the cross from 20 to 28 centimeters. The life expectancy of these dogs is around 12 to 15 years.

The body is elongated, with rounded shapes and flexible limbs. His back is low and curved and his legs are short and muscular. The tail is also short, 20.25 cm, thicker at the base than at the tip and always straight. The head of the Dandie Dinmont is large, but proportioned to the rest of the body, with strong jaws, very developed muscles, is wider in the back and narrows in the eye area. It should be noted that the whole head should be covered with hair. The eyes are large, shiny and round, of a very intense hazelnut color. Its ears are of low insertion, suspended and distant between them.

Despite all of the above, if anything stands out among all the features of the dandie dinmont terrier, it’s its hair. The coat of a dandie is made up of a layer of two layers, a woolly bottom which serves as insulation and protection and a harder and somewhat rough exterior to the touch. The hairs are distributed in the form of acorns, being longer in the preceding members, where they form fringes about 5 cm long. The accepted colors are pepper or mustard, in both cases, the tone is lighter in the fringes of the forelimbs, like that of the bottom of the tail, which forms another fringe of longer and softer hair.

Character of the Dandie Dinmont Terrier

The dandie has certain characteristics of the burrow: he is determined and tenacious, with an independent spirit. He is also sensitive, affectionate and delivered with his loved ones, which makes him an excellent companion.

The dandie dinmont terrier is a really determined dog, with a marked independent and enterprising character, being at the same time incredibly courageous, and sometimes even reckless. However, this does not make us think that these are not dogs that do not need attention, because nothing is further from reality, because they like to be pampered and petted, play with them and share as family time as possible, they are really loving!

These little ones are quite docile and also intelligent, so it will be easy for us to teach them behaviors and achieve excellent coexistence with children, the elderly, pets, other dogs … As for where they can live, the range of possibilities is quite wide, They adapt both to small spaces and confined spaces, such as city apartments, and to those that are more spacious and open, such as farms or houses with land.

Health of the Dandie Dinmont Terrier

The average life span of a Dandie Dinmont Terrier is 12-15 years. The dog will live the number of years set by nature, if the owner gives him vaccinations against infectious diseases on time, show the dog to the veterinarian for preventive examinations, at least once a year. It is also important to treat skin parasites and give remedies for worms.

The Dandie Dinmont Terrier is prone to the following health problems:

It is a fairly active small dog that needs an hour of exercise daily or, preferably, more, even if it will forgive you if sometimes your walks are shorter.

It is recommended to keep the Dandie Dinmont Terrier in an apartment or in a private house. Although he can live in an open-air cage with a warm booth. The second option is much worse than the first, since these dogs are very sociable, they need constant contact with people.

If this terrier is kept in an apartment, train him to the place from the first days. If you put him on the couch or bed, there he will sleep. The little puppy will quickly get used to its bed. Since it is small in size, you can install a whole decorative house with a mattress inside for it.

Place a bowl of water next to the bed. If you do not want your pet to spoil shoes, furniture and other household items with his teeth, buy him toys made of latex or natural veins.

It’s also important to walk your Dandie Dinmont Terrier daily. Although it is considered decorative, it needs regular physical activity. A dog with a highly developed hunting instinct cannot doze for hours on the rug. He needs active games, daily runs.

Do not neglect the rules of caring for a Dandie Dinmont Terrier. In order for him to be healthy and look beautiful, well-groomed, the following procedures should be carried out regularly:

This terrier doesn’t need much food. Having decided to feed him with ready-made feed, buy them premium class from trusted sellers. These should not be only dry granules, you can also buy canned food, pates, bones from veins with them.

With natural feeding, the basis of the diet is meat products and vegetables. Cook porridge without spices and without salt. Sweets, smoking, pickling, leftovers from the master’s table are prohibited.

Adults should eat 2 times a day. Puppies eat 6-7 times; the number of daily servings depends on age. The older the pet, the less often it needs to be fed. The basis of a puppy’s diet is cereals, vegetables and non-fatty dairy products.

Reduce the number of feedings gradually. Also, gradually you need to transfer the Dandie Dinmont Terrier puppy to solid food. This should be done when he has teeth.

Once a Dandie Dinmont Terrier puppy is 11 months old, it can be fed with food for adult dogs.

Due to its independent nature and innate stubbornness, it is not so easy to train a terrier. On the other hand, due to his sharp mind and developed intellect, the Dandie Dinmont Terrier is able to quickly memorize commands and master the rules of behavior in the house and in public places.

Based on the foregoing, the Dandie Dinmont Terrier should be trained consistently, lessons should be built in a playful way so that the dog does not get bored from monotonous repetitions. Along with firmness, the owner must show gentleness in the form of food and verbal rewards.

Rudeness and physical punishment will not help learning. On the contrary, in response to such an appeal, the Dandie Dinmont Terrier may refuse to execute commands at all. Establish a trusting relationship with your pet, but at the same time he must know that the master’s word is law!

A pet like a Dandie Dinmont Terrier needs a lot of attention. Training and education are mandatory for a dog with a hunting instinct. In addition, the Dandie Terrier is suitable for those who lead an active lifestyle and prefer to spend time in nature, in the fresh air.

So before buying a puppy of the specified breed, weigh your options and familiarize yourself with the main pros and cons of the Dandie Dinmont Terrier.