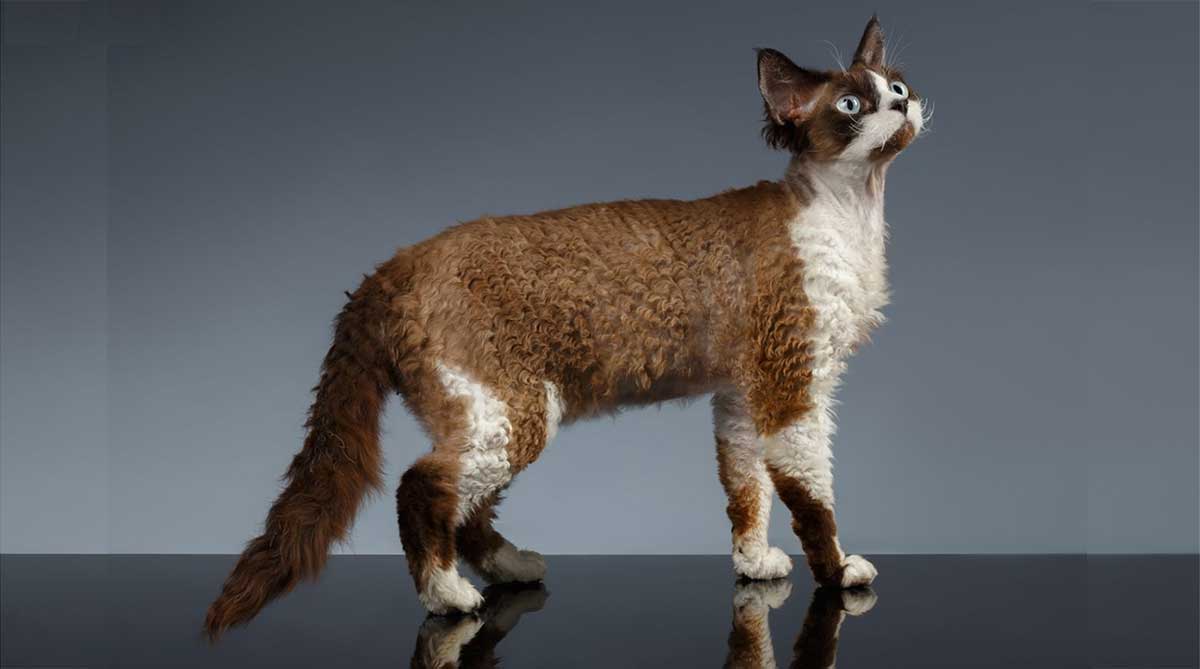 Devon rex cats are beautiful little kittens who like to spend hours and hours being pampered and playing, being considered as a cat-dog which follows its human wherever he goes. Its qualities and physical characteristics are known to all lovers of this breed of cats, but did you know that the parent of the delicate and slender devon rex was a wild cat?

The characteristic that best defines the Devon Rex breed is its particularity. It is difficult to find a similar breed to this one in all the feline kingdom, as well for their physical characteristics as for their behavior. Even its origin is particular, and that is that in its origin the human hand did not intervene, as it did in many other breeds.

Do you want to know all the details about this breed? Because in this article of ‘ Pets Feed ‘ we’ll talk about it, so we’ll explain everything about the Devon Rex, we mention its characteristics, its temperament, its care and its possible health problems, and of course on its photos.

Physical characteristics of the Devon Rex

There is no doubt that the Devon Rex is a cat that is distinguished by its physical appearance. For starters, it is much smaller and more compact than other cat breeds, with a weight that usually does not exceed five kilos under normal conditions. In addition, it has a pointed head and a short muzzle, and large triangular ears, similar to those of bats, which also makes its expression very striking. Even his eyes are larger than in other breeds, and they look huge in proportion to his head.

This, added to bright and striking colors, does not pass its expression to anyone. Its appearance can be similar to that of the sphynx cat, although it is obvious that they differ in their fur. Specimens of long-haired devon rex may even be born due to crossbreeding with Persian cats, from which they retain an important difference with any other breed.

Of course, the waves of its fur come off, which acquires a curly and unique shape. It also differs from the curly coat of the cornish rex, in that the waves are much smaller in this case. It is true that the coat volume is lower than that of other cats, which for some is an advantage, because it tends to cause fewer allergies.

As for color, there are no limitations in terms of shades, they are all accepted and in any shape, pattern and design. Therefore, there is a wide variety of devon rex cats for all tastes. It should also be noted that he has a slim, elongated body, long, slender legs and small feet. In general, the hind legs are slightly longer than the front legs, which gives it a nice appearance both at rest and in motion. Likewise, the tail is narrow and elongated, tapered towards the tip, although it seems thicker due to the amount of hair covering it.

Now focusing on the character of the Devon Rex, it should be noted that these cats are extremely loving, enjoying the company of their loved ones. So much so, that they love being able to spend a lot of time by their side, playing, caressing or simply sleeping on their humans’ knees. They are fantastic cats in coexistence with children, other cats or even dogs, because they are very sociable and flexible.

Likewise, devon rex cats prefer indoor living, although they adapt well to various types of housing. Due to their dependent nature, they do not do well to spend too many hours alone, so they are not a good choice if we usually spend a lot of time away from home. The rex must are affectionately described as “devils” or “monkeys disguised as cats” for their pranks, like hanging on curtains or climbing up the wallpaper.

These active cats seem to be born comedians. They have characteristics similar to those of dogs, such as love for toys and their ability to learn to walk with a harness and a leash. They are very sweet and affectionate cats, who hate being bored or being alone. Visitors may be surprised to be the subject of a detailed investigation by devon rex before they can even sit down.

Devon Rex cats appear to be a fairly healthy and robust breed, although that does not mean that we need to be on the lookout for vaccination and deworming schedules, both internal and external. In turn, it is highly recommended to carry out regular veterinary checks to assess and review the general health of our pet.

Despite the above and, therefore, there are no characteristic Devon Rex diseases, it is true that these are cats who tend to suffer from ear infections due to what we have already pointed out in the previous section. Likewise, if they are not getting the exercise they need or if their diet is not adequate, they may be overweight or obese. If we provide all the care the devon rex needs, its life expectancy is between 10 and 15 years.

Although devon rex molts much less than other breeds (because it has less hair), it is not true that the breed never changes or that it is hypoallergenic. Actually, the allergy-causing protein is in the saliva of cats.

It is important to differentiate the care aimed at the hygiene and aesthetics of the animal from those related to its internal health. In terms of hygiene, the Devon Rex does not require too much care to keep its coat shiny and in good condition.

Indeed, it hardly loses hair, so a weekly brushing and a full bath every two months will be more than enough to take care of it. It is necessary to pay more attention to its large ears, which can accumulate earwax and dirt, so it is necessary to clean them frequently with cotton and specific cleaning products for cats.

On the other hand, it is advisable to provide a small warm and comfortable corner, like a nest, for the Devon Rex, where the animal can curl up and rest. His sparse coat does not allow him to protect himself from the cold, so he needs help to warm up, especially in winter and in the coldest periods of the year. You can even buy special clothes for cats, such as sweaters, so that your little feline has no problem even at the worst times of the year.

Another thing to keep in mind about the Devon Rex cat is that it is an animal that has a voracious appetite despite its small size. This implies that if his diet is not controlled, he can easily gain weight and become obese, which is very dangerous for cats. Therefore, to avoid health problems, it is essential to adjust the amount of food to your size, always opt for quality food and offer several meals a day. With which will also prevent the occurrence of gastric problems. It is just as important to offer your cat the opportunity to do all the physical exercise it needs, which is a lot in the case of devon rex.

Because it is only when he can release all this energy that characterizes him that this cat is really happy. In addition, if his needs are met, it is also much easier to educate him, something fundamental for his own safety and for his behavior at home to be exemplary.

If you are wondering about the price of devon rex, the first thing you should know is that, like any breed, if you expect to have a guaranteed copy, you will need to make the necessary investment.

You should look for a breeder specializing in the breed, who offers you all the guarantees regarding his health and his origin. In addition, only an experienced breeder can advise you on his training and the care he needs. Never buy an animal through individuals or in pet stores, as you will encourage indiscriminate breeding and you will also have an animal that may not meet the characteristics you are looking for. Be aware that there are few specimens in the world, because it is a relatively recent breed.

By nature, Devon Rex are quite jumpy, so be prepared for the fact that from time to time they will seek adventure on closets, mezzanines or even your shoulders.

Goodwill and good disposition are the key characteristics of the breed. Any Devonian will understand with understanding that he is not the only favorite of the owner.

Devon Rex cats are literally “hot cats”, which is especially noticeable with tactile contact. The illusion of heated skin is created by the short hair of cats, which promotes more intense heat transfer. For this reason, animals are sensitive to cold and often freeze even with a slight drop in air temperature.

No matter how kindly cats are towards children, they will always prefer the company of adults to them. Consider this character trait and do not burden the animal with communication with babies.

These cats are extremely inquisitive and playful and do not lose these qualities with age. Eared “pensioners” love chasing teasers and a ball no less than their young counterparts.

The Devon Rex was first bred in 1960. The father of the Devon breed, a curly haired wild cat, lived around an abandoned tin mine near Buckfastley, a small town in South Devonshire. -western England, which borders the home of the Cornish Rex.

A curly-haired cat mated with a domestic short-haired cat. As a result, kittens appeared, which were found by a resident of the city – Beryl Cox. One of the kittens, a brownish-black male, had the same short, curly coat as his father. Beryl named this kitten Kirli (from English: curly).

At first, the kitten was believed to share the same genetic makeup as the Cornish Rex, since the Cornish originated in Devonshire, but breeding trials soon established that the kitten was unique, meaning it had a unique constitution. unique genetics due to natural genetic mutation.