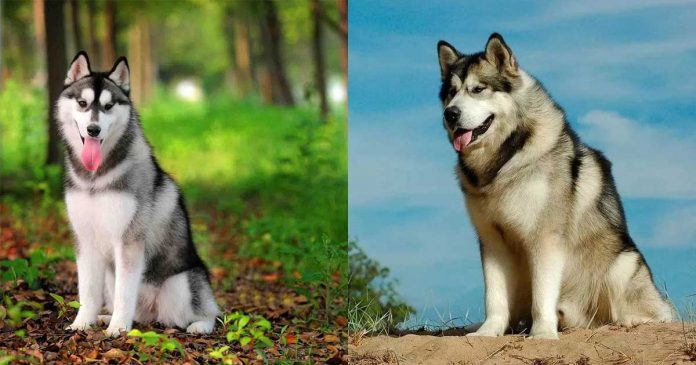 The Siberian husky and the Alaskan malamute are very popular today: cute furry animals with gray or bright blue eyes, extremely similar to wolves, are increasingly gaining the attention of those who want to own a dog. These breeds are very similar – let’s see how to tell a husky from a malamute?

They are sled dogs, bred by nomadic peoples of the north, probably the Chukchi. Husky – a distorted sound of the word “Eskimo” – “Eskimo”, invented by the Americans: at the beginning of the 20th century, they were taken from Chukotka to Alaska, and the century of popularity of this breed in the United States began; dog sleds began to be used during the “gold rush”.

These Nordic dogs reach a height of around 60 cm at the withers and a weight of up to 30 kg.

A thick undercoat helps snow dogs survive in cold climates, endure frosts down to -60 degrees, but does not complicate the maintenance of the animal: dogs of this breed shed twice a year, during these times you need to comb out the dead hairs. The rest of the time, there is no problem with grooming the coat.

The eyes of the Siberian husky can be brown, green, amber, and blue, and you can often find a dog with colorful irises.

Representatives of this breed need constant movement, physical activity, at the genetic level, familiar to sled breeds. Huskies are not guardians of a house or apartment: they are loyal, but very kind and never show aggression. The dog will become an intelligent and affectionate companion for children’s games.

Siberian sled dogs should be strictly educated from an early age. Their psychology at the genetic level implies that the family is a herd, which means that the owner, having acquired authority in the eyes of the dog, must become a leader.

Of course, it is better for a sled dog to live not in a city apartment, but in a private house, having the opportunity to constantly be outdoors. But if you still decide to keep the dog in the apartment, then you have to walk with him a lot, it is advisable to spend at least half an hour a day, walking without a leash in a fenced area, running in the park, doing riding a bike or skiing with the dog.

Ideally, if the animal will walk about 10 km per day. But be careful! – Huskies are very freedom-loving and capricious, prone to “escape” at will. Therefore, you need to take precautions – do not leave the dog off a leash in an unfenced area, and if you keep it in an outdoor cage, it will be helpful to build walls up to 1.8m and deepen them a bit underground – the dog can easily jump over a three-foot-long fence or knock it underneath.

The diet of these dogs is no different from other breeds – twice a day. So that the four-legged friend does not lose the necessary vigor for many hours of walks, and his coat is shiny and soft, it is recommended to give only premium kibble.

Is the Alaskan Malamute a taller, hairy husky?

The symbol of the Alaskan breed was bred on the territory of this peninsula. Its name comes from the word “Malemute” – the Eskimo tribe that bred these dogs. At the end of the 19th century, during the “gold rush”, these dogs, like huskies, were used as a means of transporting goods without problems.

Malamute colors can vary from light gray to black, there are white and red with markings representative of the breed.

The Malamute’s eyes are always brown – the blue iris does not match the breed standard.

The conditions for keeping representatives of this breed practically do not differ from the rules for caring for a husky.

What do husky and malamute have in common?

To sum up: what do these two breeds have in common? These northern sled dogs are almost the same size with a very similar coat color – representatives of both breeds are black-gray, gray-white. They are also united by some similarities to a wolf.

They have ingenuity, independence and stubbornness (and among the advertisements about escaped dogs, almost half are for representatives of these breeds!), They can open the doors of helmets and simple locks – the owner must pay particular attention to the breeding of the puppy. As a rule, both bark very rarely – most often they howl, sometimes, in the absence of the owner, organizing a concert for their neighbors. Both breeds are very intelligent.

Recently, the half-breeds of these two breeds are more and more common. They are not suitable for display and breeding, but ideal for families.

If you are looking for an active and outgoing companion, do not hesitate to choose a husky. If you need a calm, balanced and tall companion, then all the advantages are on the Malamute’s side here.