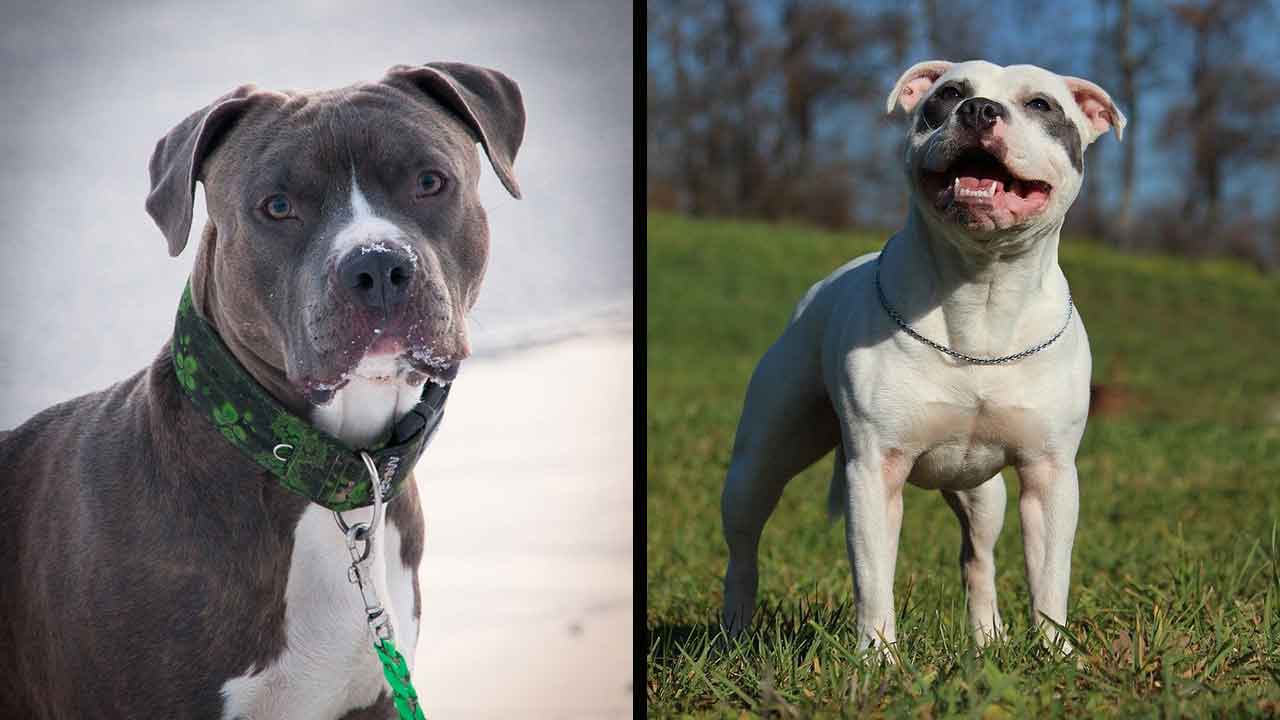 Although they are part of the same group and are similar in appearance, these dog breeds differ in important points

The staffordshire bull terrier and american staffordshire terrier breeds are increasingly gaining fame and, consequently, space in homes – proof of this is being on the list of the 100 most popular in the world, according to the American Kennel Club (AKC). But appearance and even similar names can end up confusing many people.

It is important to know how to recognize them, since the differences are in important points such as behavior, size, weight, necessary baths and energy.

Belonging to the Terrier Group, this dog is not tall, measures between 35 and 40 centimeters, but is very strong and stocky, weighing no less than 11 kg and can reach 17 kg. Life expectancy varies between 12 and 14 years.

Its head is short and wide, with a flattened upper part. The snout is always black and the medium ears are slightly drooping. The neck is muscular and short, the chest is wide, the legs straight and well apart. Muscle definition can be seen throughout the body.

Known for his courage and intelligence, the staffordshire bull terrier is quite energetic and needs constant activities to stay healthy physically and mentally. Throwing the ball for him to catch, running alongside the owner or taking a long walk is enough.

When it comes to hair, it doesn’t take much work to keep it healthy. Because it is short and smooth, no grooming is necessary, occasional baths and weekly brushing are enough. The nail should be cut at least once a month and the ear cleaned regularly to avoid infections. Their life expectancy varies between 12 and 14 years.

Also, from the Terrier Group, the american staffordshire usually measures between 43 and 48 centimeters and can weigh from 18 kg to 31 kg, that is, it is bigger and heavier than the staffordshire bull terrier.

Life expectancy varies from 12 to 16 years. Its head is medium in size, the ears are close, short and raised even without cutting (which is prohibited in Brazil), the snout is rounded at the top, the neck is medium, strong and slightly arched.

This dog is athletic and has plenty of energy, that is, it needs a lot of exercise. Very attached to his family, he needs to be stimulated – if he is left loose in a space during the day he will not spend the necessary energy. Activities such as agility are a great option for the breed.

Unlike the staffordshire bull terrier, the american staffordshire needs to be trained and socialized from an early age, as it can develop behavioral and relationship problems.

Bathing is only necessary when the dog is soiled or stinks. Otherwise, just weekly brushing is enough to remove dirt, hair and dead skin from the short, stiff coat.