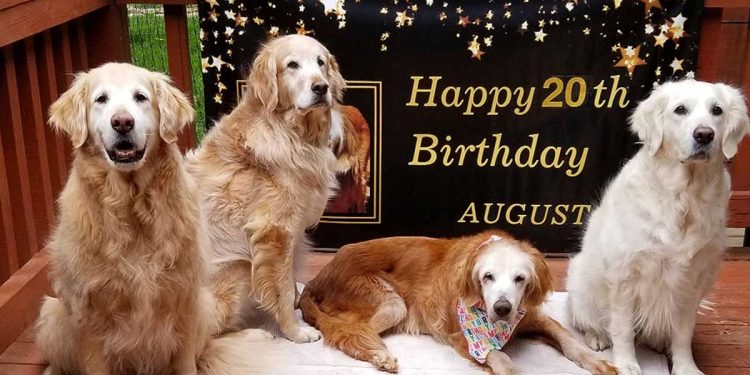 A Tennessee dog celebrating his 20th birthday has become the oldest living Golden Retriever in history.

A dog has caused a stir by becoming the oldest living Golden Retriever in history, after celebrating its 20th birthday. The dog named Augie, affectionately known as “Augie”, had his birthday in April according to a blog post GoldHeart Golden Retriever Rescue.

Augie lives with her owners, Jennifer and Steve Hetterscheidt, in Oakland, Tennessee (USA). The couple adopted Augie when he was 14, and they say he was born on April 24, 2000, so this year he celebrated his 20th birthday.

After being moved twice and returned to the shelter, Augie luckily found a home with the couple.

The 20-year-old dog is the oldest Golden Retriever

They thought most people wouldn’t want a Golden that old, but they had no idea what trip they were going to take Augie next. She was RVed across the country, said several canine and feline siblings and can play ball in the pool.

Plus, the couple have been rewarded with over six years of unconditional love and loyalty from this wonderful pup.

Since most goldens, in general, live an average of 10 to 12 years; it is a gift to be able to count on additional years of such an unconditional companion.

Without a doubt, this is a great reason to celebrate. His owners have organized a party for him with his brothers, so that this day will be unforgettable. GoldHeart Golden Retrievers Rescue, shared several photos from the celebration, where Augie is seen with gray hair and wearing a birthday sash.

Additionally, you can see that he enjoys carrot cake for dogs and hangs out with his Golden Retriever brethren; Sherman, Belle and Bruce.

Despite Augie’s age, her owner says he is still very healthy and his pet is surprisingly healthy. When she first gets up she is shaking a bit, but she is still moving very well and enjoying all her daily walks in the yard.

Turning 20 is amazing, almost double his life expectancy, but that’s because he has great genetics and of course thanks to his family.

They did a great job as parents, giving him all the care he needed and making sure he got along great with his vet.

We will care about them as long as we have them and love them forever.

Augie will forever be remembered as the oldest Golden Retriever in the world and we hope he will continue to break the record for many years to come.