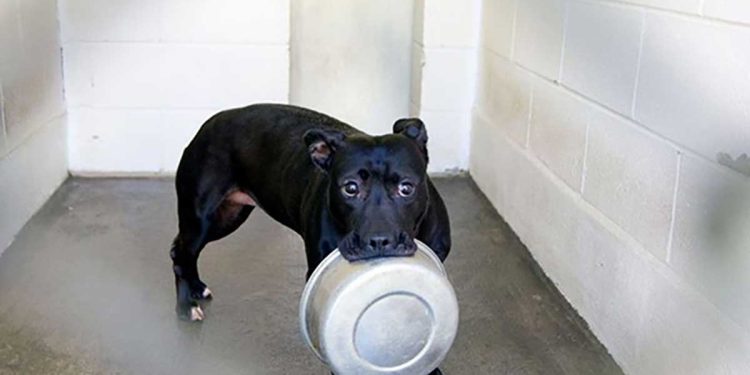 Poor Rose was locked up for 4 years because people thought she was a “bad” dog. But now her life has changed

Rose is a female dog who just needed someone to believe in her, and Glorianne Lagnese was the perfect woman for the job. She adopted her after her friends took her from a shelter in Connecticut in 2013.

They were concerned that she would be euthanized for lack of training and because she is a black dog, because black dogs have a harder time being adopted. So they took her out, hoping they could do it. work with their other dogs. But it was too much, and they asked me to take care of her. We had her at our house a lot, then a few nights. She fit in really well… so they let us asked if we wanted to keep it.

Glorianne describes Rose as a “good dog” who gets along well with other dogs, cats and small children, but she had a lot of fear issues.

She’s a scared dog. She had no self-confidence. Sometimes she would hear noise in the house and she would run away and hide.

So Glorianne began training Rose, who made slow but steady progress. Unfortunately, a year later, something unexpected happened.

Someone broke into Glorianne’s house and unleashed all of her dogs, including Rose. When neighbors tried to catch the loose dogs, Rose panicked and bit two people.

She was in a condo complex, and they cornered her trying to contain her, and she freaked out. People she didn’t know were all around her and she had nowhere to go.

Glorianne explains that it was not a serious injury, but the neighbors called the police and animal control. Glorianne was told Rose needed to return to the shelter to keep her for 10 days.

I said, ‘Okay, here’s the dog,’ because I didn’t know I could have said anything else. I put it back, following the instructions, and they said, ‘Ten days. ‘

But 10 days passed and the kennel did not release her. Glorianne was told that Rose should be euthanized because she was a “violent dog”.

Glorianne was immediately shocked and upset, so she teamed up with Thom Page, a lawyer from the Lexus Project who regularly helps death row dogs.

Page began working on Rose’s case for free, fighting to free the frightened dog from the kennel. The case got complicated and was eventually transferred to federal courts.

She’s a nice dog, and I couldn’t see why they had to kill her because she bit someone. I decided I wanted to fight for her, and that’s what we did.

Poor Rose suffered in the shelter while Glorianne did her best to get her out of there. She spent all day and all night locked in her kennel without a soft bed or toys. Rose was also not receiving medical attention, according to Page. To console herself, she grabbed her metal bowl and put it to her mouth.

Glorianne and her husband tried to visit Rose all the time, but the staff only allowed them to see her in her cage behind a fence.

Four and a half years passed before Rose was finally released from the kennel.

To barter her freedom, Glorianne had to give it up. However, Furry Friends Foster and Rescue, which is run by Leslie Rich, a friend of Glorianne, agreed to take Rose into their care.

Page also arranged for Rose to be promoted by professional dog trainer Allen Szykula, to satisfy the courts.

I can’t believe he’s finally out. Four years and eight months ends up being torture.

Page, who has worked tirelessly on Rose’s case, said he was “delighted” that Rose was finally free.

I save one dog at a time. That’s my philosophy

Rose, now around 7 years old, is adapting very well to her new life outside the kennel.

I thought she was going to be very, very scared of everything, that she wouldn’t want to get close to her trainer or anything for a while, but that’s not what happened. other night at 2 a.m. I woke up and Allen had sent me a video of her, it was the same day she came out, and he was gently stroking her head, and she got up and dropped her head in her lap. I was crying. It was the best thing that ever woke me up.

This dog is very resilient. She bounces back like no one thought she would.

Rose still has many months of training and rehabilitation ahead of her, but she will finally be available for adoption, and Glorianne wants to make sure she finds the best home.

I want a home that takes her for walks, loves her, gives her treats and lets her sleep in her bed…and be a dog, because that’s what she should have had all along.