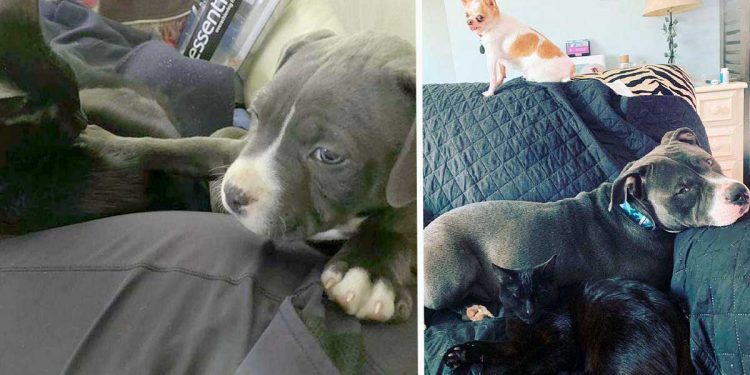 Winston is an adorable dog who was adopted since he was just a puppy by the Beth Clark family. His family rescues and adopts felines that need help, so Winston learned from a young age to live surrounded by cats.

And of course, thanks to all this time that he has lived surrounded by cats at home, his company did influence Winston in a rather funny and unusual, but completely adorable way.

He joined six cats. They all bonded in such a loving way.

Dog that was raised with cats won’t stop purring

When Winston was a sweet 4-month-old puppy, Beth noticed that he made a very peculiar sound when she stroked him. His curious cub was purring happily as if he were one of the cats in the house.

At first, I was surprised. But I quickly realized that what he was actually doing was a vocal expression of satisfaction that he had learned from his brothers!

Watch Winston purr in the video below:

And while Winston’s particular purr may be a bit unusual for a dog, after all to his loved ones he is still the same sweet boy who loves his family and petting, and apparently to his mother, the funny sound he makes. this dog being happy is music to his ears.

Beth is happy that Winston feels this spirited and is a happy little dog loved by all.

Show that no matter the species, the ability to express love and affection can transcend even the most obvious differences!