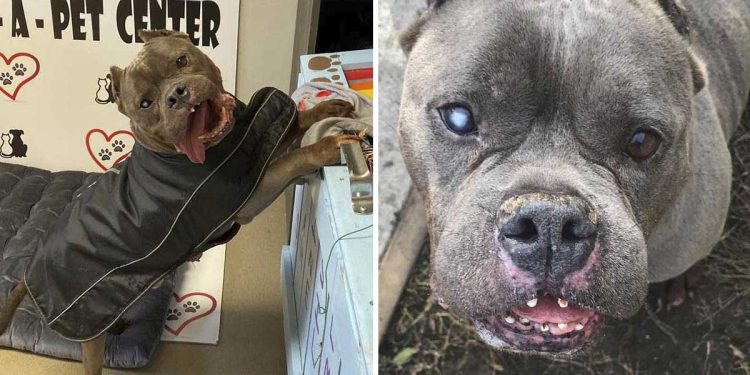 Wally is an older dog who wasn’t adopted just because he looks different. What he wants is a loving place to spend his last years.

When Wally first arrived at the shelter, you could tell he had had a tough life. He came in as a homeless dog of about 10 years old and it was clear he had been living outside for most of his life.

Despite everything that had happened, the only thing Wally wanted from the start was for someone to love him. Right away, her new friends at the shelter gave her all the love and attention she needed.

The dog had several medical issues, including a serious skin infection and was blind in one eye, and he looked a little different.

Town of Islip Animal Shelter staff were concerned his unique appearance would put off potential adopters, but they hoped to get a glimpse of the wonderful dog they had quickly fallen in love with.

Danielle Gorle, a veterinary technician at the shelter told The Dodo:

He loves to drool and would do anything for food. He also likes to go out and do nothing.

Wally has so much love to give and what he wants most is to find the perfect family to share it with. Unfortunately, it’s been over a year and this sweet dog is still waiting at the shelter.

Being an older dog, Wally just wants a quiet place to spend his golden years, instead of ending his life in a shelter, where he feels increasingly depressed.

Her rescuers hope to find her a forever family as soon as possible.

Ideally, Wally could find a home with no stairs, no children under 15, and no other pets. He also needs a family that understands his medical needs and knows that all he needs more than anything is love, and he will return it.

All Wally wants now is to snuggle up with a family that will love him for the rest of his life, after having had a tough life.