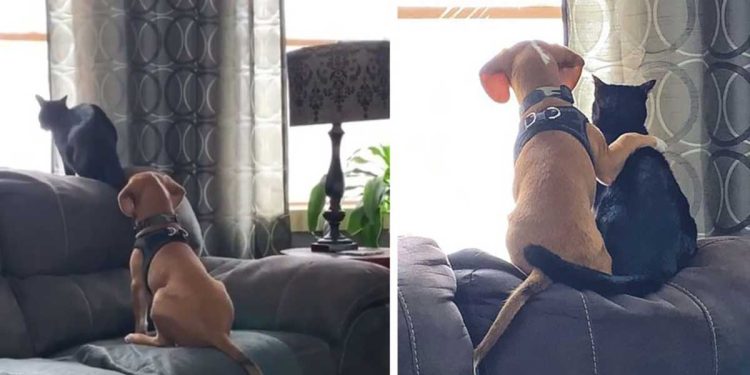 A dog and his best friend, a cat, are discovered by their owner, in a tender scene on the couch as they watch the birds embrace.

The friendship between dogs and cats has always aroused curiosity because of the idea of ​​rivalry attributed to them. That’s probably what they thought of Bo, the beagle, and his friend Jasper, the cat, when they met, but this dog and his best friend managed to soften everyone on social networks and to refute these beliefs of rivalry.

As a puppy, Bo was very shy, especially when it came to cats, for his part Jasper didn’t know what to expect from the family’s new pet.

Their adoptive mother, Lisa Olsen-Plummer, was sure that in time they would get along, but she never thought about how quickly this pair of animals would become great friends.

The dog hugs his best friend while watching the birds

Jasper was very suspicious of Bo at first, he stayed back and watched from a distance until one day he walked over to Bo and hugged him, it was almost like saying , ok let’s play, I think that’s where Bo learned the hug

The other day, while in her living room Lisa captured a cute scene with her camera, Bo walked over to Jasper who was on the couch, sat down next to him and kissed him softly.

I was super excited to see this beautiful bonding moment between two animals showing love for each other.

They play rough and goad each other, sometimes it gets into a fight and I break them, just like kids.

From then on, this couple is inseparable and enjoys each other’s company.

Sometimes, of course, it’s not all easy, but her adoptive mother often appreciates the bond that Bo and Jasper have created.