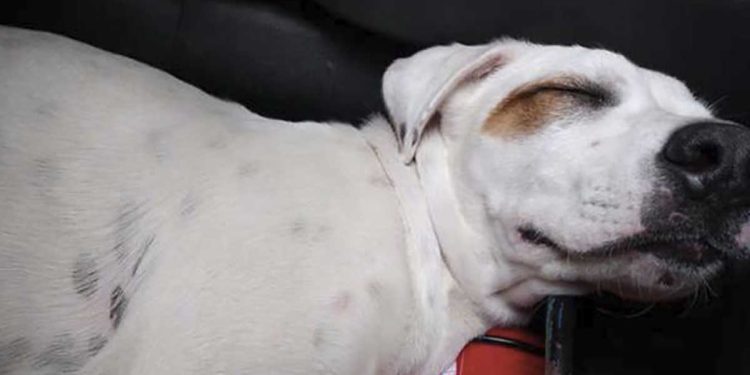 A homeless dog gets into a couple’s car, settles in, and decides to take a nap, not thinking he’s found a safe place to rest.

In February, Rodrigo Coelho and his wife went to the local pharmacy to ask for medicine, but they brought home a big surprise. As they exited and walked to the parking lot where their car was, a disoriented and tired homeless dog accosted them.

I had just left a pharmacy and I was in the parking lot. My wife opened the door to get in the car and this stray dog ​​showed up like he knew us.

Homeless dog jumps into unfamiliar car and takes a nap

The dog seemed lost, but when he jumped in the car and made himself comfortable to rest, he immediately began to take a nap.

Rodrigo could tell from the dog’s paws and nails that he had come a long way, and he smelled like he had been looking for food in the garbage cans.

The couple couldn’t leave the dog to its fate, nor had it left them with many options, since it had already settled into the car.

He settled on the floor of the car and slept. He seemed relieved to find a safe place to rest.

Arrived at home, the dog did not take long to find a good place on the sofa and he decided to continue to take a nap. The couple’s other dogs were very curious about this new visit, and when the dog finally woke up, he showed his noisy side.

My dogs were scared because the dog was very busy and playful, but there was no fighting. Soon I got used to the environment and my other dogs accepted it.

Rodrigo collected the images of the dog adapting to his new environment, posted them on social networks to spread them and find his masters. The video went viral and comments soon poured in from residents of his town, reporting that they had seen him wandering around their neighborhoods.

In the post, Rodrigo learned that the dog was named “Thor”, and that his family was looking for him and they lived just 8 miles away.

Rodrigo believed that fate had brought them together for this purpose, so he arranged a meeting to deliver him to the family. The supposed homeless dog, seeing his family jumped for joy and immediately recognized them, giving Rodrigo the security of what he was doing.

Thor was happy to be reunited with his family, it was very obvious. He recognized the couple, the car and even his canine friend who passed by. I made sure the right thing was done and everything was fine.

Now Thor is safe and happy, thanks to the timely action and kind hearts of the Coelho family.