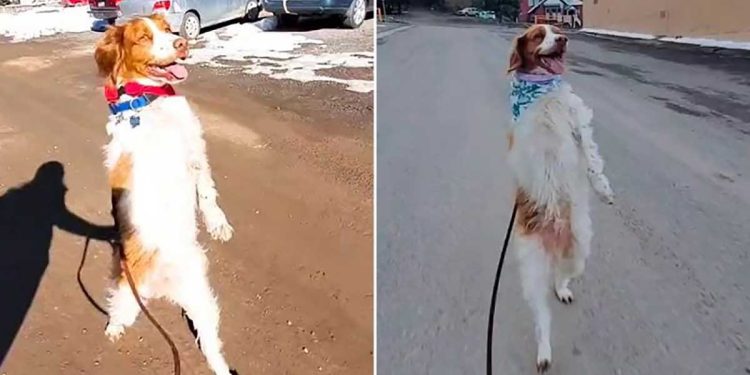 A determined dog who was in a serious car crash and lost one of his front legs learns to walk like a human.

The little dog named Dexter was adopted in June 2015 when his family was happy to have added the perfect pet to their home. Dexter was characterized as an energetic and cheerful dog, he quickly won the hearts of those close to him who could not imagine a life without him.

Although he is determined to live his best life, nine months after arriving home, he loses almost everything in an accident. One day Dexter decided to run away from home, his family and neighbors started his search, but the puppy was too fast and they couldn’t catch him.

Tim, his father, saw him in a local park, but when he tried to get closer, Dexter ran away and crossed the road.

A determined dog learns to walk like a person

At this moment a truck arrived, so it was impossible for the driver of the vehicle to avoid the fast dog. The only thing Tim could do was provide first aid to Dexter, who was stuck under one of the front wheels.

Tim decided to call his wife, Kentee Pasek, to tell her what had happened and told her that Dexter had injured his front legs a bit.

When I arrived on the scene, it was much worse than I imagined.

Because they live in the middle of the mountains, Dexter and his parents had to drive 45 minutes to get veterinary care. Tim and Kentee were unsure if Dexter would make it through the long journey, but his will to live won the battle and he made it out alive.

The veterinarian treated him urgently and, thanks to his experience, he carried out the necessary procedures to restore the health of little Dexter.

Although Dexter managed to survive this horrific accident, his rehabilitation process would be long and it would take a lot of dedication to fully recover.

Unfortunately, Dexter lost one of his front legs and the other front leg was immobilized due to various elbow injuries. The dog had to stay in a cone for almost a year, and had to learn to walk again.

Despite many complications, Dexter was still the happy dog ​​his family had always known and was ready to fight.

He was smiling, happy and positive. There were many days where his attitude was contagious to all of us.

Over time, Dexter learned to walk on three legs. However, Dexter is a very energetic dog who likes to explore, so he found he needed to walk faster.

Incredibly, the dog learned to walk upright on its two hind legs, like a human, which surprised everyone. It’s unclear how he did it, but one morning while sunbathing in the garden, Kentee was impressed by Dexter’s attitude.

Went home for coffee, when I came back outside he was on the front porch. I was in shock, a little upset that he… had just had another surgery.

The woman didn’t know how she managed to climb the stairs, but she was determined to find out how she did it, so she decided to make a video.

Kantee took Dexter down and put him on the patio, she started recording with her cell phone and the dog started walking straight ahead of her.

I was shocked and scared he would get hurt again. I remember feeling both admiration and admiration for this determined dog.

Little by little he perfected his way of walking and now he only moves by walking upright like everyone else.

Seeing a dog walk like a human doesn’t happen every day, so in no time he’s become a local celebrity. People who know him love him and although he’s popular, Dexter hasn’t stopped being the same happy dog ​​he’s always been.

Dexter is not only popular in his city, he has also become a star on social media with his adorable videos, and many people around the world can see Dexter’s example of passing, although many do not. don’t believe.

Watching Dexter walk is strange, but his desire to live his life to the full led him to make this difficult decision, and he’s happy.

Dexter never gave up and became a fine example of dog persistence.