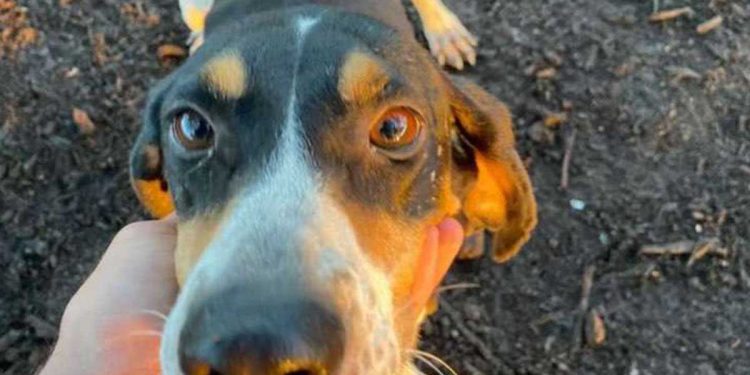 William Thomas Green found Lucky Lucy while walking Cokie, who led him to where the malnourished dog was. The man did not hesitate to adopt her, and thus her life improved.

Dogs generally brighten up the lives of humans, but they can also do this to each other and help each other in a very beautiful and meaningful way, even running away from the street situation.

William Thomas Green witnessed something like this one day in September 2021, when he took his dog named Cokie for a walk in the park in the morning after a rainy night.

Once the man released Cokie from his leash to run and walk free, the dog saw something that made him very curious and ran.

William, understanding nothing, followed his pet to find out what had caught his attention.

The young man told The Dodo:

Cokie immediately ran to a corner of the park and continued to stare at me. I went back to see what was bothering him so much.

Cokie guided his human to the area of ​​the park that had interested him, and showed him what he saw. It was a dog who slept in a pool of mud, and who apparently had spent the rainy night in this corner.

This scene moved William, who did not hesitate to take care of her when he saw her so malnourished and sick that she could barely stand on her own. “I immediately went to the car and brought him food and water. After eating and drinking, she was able to get back on her feet and didn’t leave me,” William added.

The young man then petted her and took her to the vet, where she was diagnosed with heartworms and whipworms, and had been used for breeding. Determined to give her new life, Cokie’s owner adopted her and named her Lucky Lucy.

The man introduced her to his wife, in-laws and family, who welcomed and loved her as soon as they saw her. His health improved considerably.

Lucy was incredibly shy for the first few weeks and even though she’s a foxhound she didn’t howl or bark at anything. Once she was more comfortable she started making little ‘awoos’ and you could tell she was starting to trust everyone in the family. Now if she sees a bird outside, she goes crazy and screams like someone has come into the house.

Cokie did a great job guiding her owner to where Lucky Lucy was, and William walking the dog at that exact moment. Such a common and simple moment that made their life better, now the dog has a sister to play and share with.

It’s great that she’s getting a second chance at life. I don’t know how she’s so nice after everything she’s been through.

Check out a video of them below:

@lonelyfoxmusic A happy ending for #lucky! #rescuedog #abandoneddog #abandonedpuppy #puppy #dog #whorescuedwho #pups #playtime ♬ You Got A Friend In Me (From “Toy Story”) – Just Kids