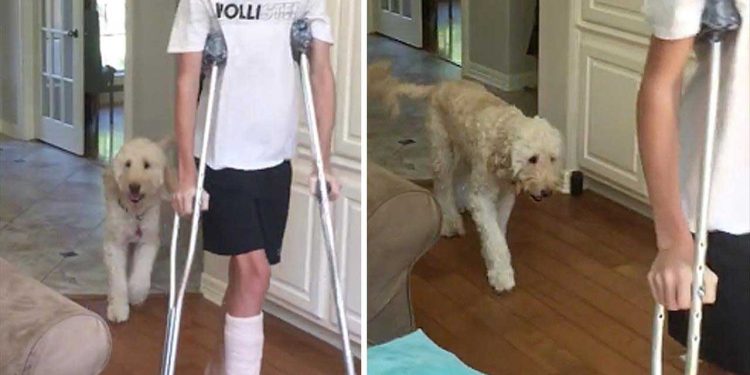 Dogs are often the main attraction in many of the funniest videos on the internet. Canine personalities can be as varied as humans, and the perfect canine equivalent is out there for everyone.

Recently, a dog made all of us who witnessed his owner’s imitation walk laugh. What made the imitation so fun was that the teenage owner’s leg was in a cast and he had to use crutches to get around.

The video is a must-watch for anyone who loves dogs, and even people who aren’t necessarily dog ​​lovers will be amused by the wit and cleverness of this one.

The video begins with a teenager walking down the stairs on crutches. The boy is on crutches following a recent ankle injury. Once he descends the stairs and the boy enters the living room, a dog can be seen following close behind him.

The big white dog, Sawyer, does more than just follow his friend as he takes a closer look. The dog also limps and it does not take long to realize that he is deliberately imitating the teenager’s walk. One can only wonder how long it took the dog to mimic the gait so perfectly.

Even after the teenager steps out of the camera lens, Sawyer continues to limp on his right front leg. One thing is clear from the video: Sawyer loves the attention he gets from his family and does his limp impression quite often.

The dog is a perfect example of how smart dogs can be. It is also a great entertainment provider.

Did you laugh at the dog’s imitation of the teenager’s limp? Send this video to all your friends. It’s the perfect solution for a boring day.