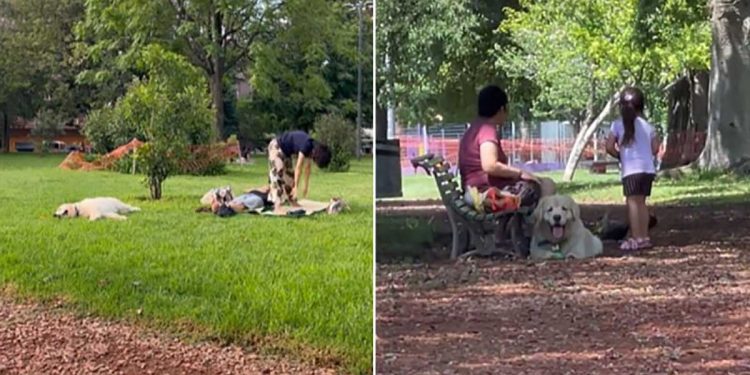 An adorable dog pretends to be someone else’s pet to stop his mother from taking him away from his favorite haunt, the local park.

Some dogs balk at the thought of their owners leaving the park, playing dead, or staying put, but Bear has a different plan. He prefers to pretend not to know his mother, Carolina Paludi, stating that he would not mind staying in the park.

Bear is a golden retriever that loves spending a day at the local park with his mom, and he enjoys it so much that when it’s time to go home, he always protests. The most curious thing is that her way of doing things is very funny, since when Carolina says it’s time to leave, she does the opposite.

It may seem like a behavior that any other dog does, but Bear not only walks away, but also sits next to other people.

Dog pretends to be someone else’s pet

She then looks at her mother as if to show her how easy it would be to find a new family if she didn’t quickly change her mind.

The woman made several videos of the curious moment and posted them on social media. In them you can see when Bear kicks in.

Bear does this every time it’s time to leave the park. He approaches another family and ignores me.

Bear shows how well he fits in with his new family at the park and how easy it is to replace mom. There’s even a video where Bear can be seen doing yoga, surrounded by people he’s never seen in his life.

Bear always tries to fit in with the chosen group of people, but deep in his heart he knows not to get attached. On the other hand, the people Bear intends to adopt as his new family don’t seem to care that he’s using them to trick his mother.

People still agree to be part of his plan, as Bear’s adorable presence eventually wins over everyone he meets. However, deep down, Bear knows that his mother is the one who loves him the most and that he could not change her, because she is irreplaceable.

After taking his sweet ride for a while, Bear eventually returns to his beloved mother’s arms, and then they walk home together.