Dog Has Happiest Reunion With Family After Tornado Destroys His Home 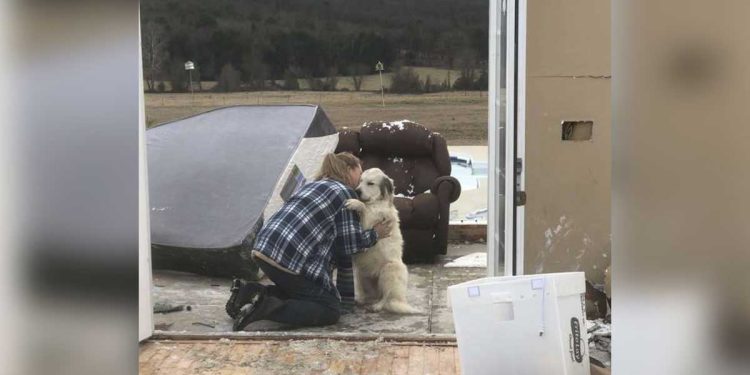 Dog has the happiest reunion with his mother, after a strong tornado hits their town and destroys their beautiful home.

On January 10, they warned in the news of the possible arrival of an EF2 tornado in Logan County, Arkansas, which put all its inhabitants on high alert. Suddenly Bruce and Ona Dunlap’s cable stopped working

Heeding the warning, Bruce wanted to see with his own eyes what was going on. When he left the house he noticed that everything was very calm, that there was no wind and that they had nothing to fear, what they did not think was that a few minutes later the situation would take another course.

Julie Moore, a friend and neighbor of the couple, warned them that they had better go to the storm shelter, following the advice they quickly got to work.

Dog has happiest reunion with family after tornado

Ona ran into a room to help her disabled roommate into the shelter, while Bruce took it upon himself to search for the house’s pets, four cats and two dogs.

But he was missing a cat, Ladybug, and the dog Dasha, who ignored Bruce’s call, so he had to make the difficult decision to take shelter without them.

Dasha could sense something was wrong and she went into the kitchen and lay down. Bruce didn’t know what to do…when he got to the storm shelter he could barely close the door.

Ultimately, the tornado tore through the location, leaving a large amount of property damage. When it was over, they came out of the shelter and couldn’t tell which part of the house was still standing.

At dawn, as family and friends assessed the damage to their home, a familiar face appeared amidst the rubble, it was Dasha.

Dasha could feel something was wrong and she went to the kitchen and lay down. Ona just grabbed his fur and grabbed his face and started talking to him, saying, “I’m sorry. We are here

When Julie witnessed this sweet reunion, she decided to take out her mobile phone and take several photos of the beautiful encounter.

The couple were very happy to have found their dog safe and sound, but a family member was still missing.

Suddenly Ladybug came back too, she was completely wet and shivering with cold, Ona hugged her and started to dry her fur.

One thing Bruce said when they found them both and she was hugging them. There are your kids.

The family has a lot to do before recovering from the damage caused by the tornado. Fortunately, the community is mobilizing to help them.

The most important thing is that the whole family is complete.