After spending his whole life chained up, this dog runs for the first time thanks to a kind-hearted person who never gave up until he was freed. 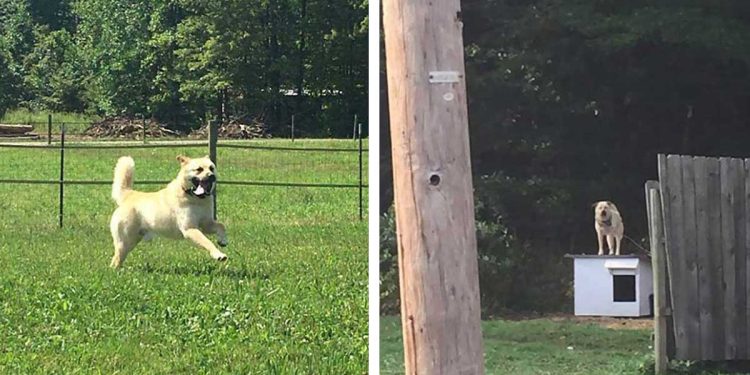 Peanut is 3 years old, but in a sense his life is just beginning. Since he was a puppy, the dog had been tied up in the backyard of a house in Pennsylvania, USA. Her owners lived on the property, but offered her no real love or companionship. But thanks to a kind-hearted person, this sweet dog runs for the first time and knows how beautiful the world can be.

All Peanut knew in the world was just what he could reach from the short, heavy chain around his neck. Local residents became aware of Peanut’s dire situation after a fence surrounding the yard collapsed, allowing people to see inside.

The authorities were alerted, but nothing seemed to be done about it. Eventually, HOPE for Erie Animal Wellness, an out-of-area rescue group that works to improve the lives of chained dogs, learned of Peanut’s situation.

“My daughter is volunteering with HOPE, and they got a lot of calls about this dog, but it was too far, they were an hour away and no one could commit to joining this dog.”

It’s only a short drive from Russelline’s home to Peanut, so she went to see her situation for herself and finally decided to participate.

“I went out and looked, Peanut had a rundown doghouse, the roof had holes in it, the ground was rotten, there wasn’t much to protect it and we had a very wet spring. It was lying in the water because he couldn’t get out. I love animals, so I said: I’ll take care of the dog. I’ll spend time with him. And I did.

Russellline has reached out to Peanut’s owners to offer help to improve the dog’s life. The family admitted that the dog had been kept chained all his life, probably not out of malice, but rather due to an old way of thinking about pets and a lack of education as to what is appropriate today. today.

To them, it seemed normal to keep Peanut tied up like that.

“Many people in this country grew up with dogs in chains, especially in rural areas, and it still happens. Not everyone decided that it was best to have the dogs indoors.”

“We started by giving Peanut a new kennel, new bowls, new leash and new collar. The new leash was long enough for him to reach the grass to lie on, when we next came, he was enjoying the grass, he was smiling, it was like he was a different dog.”

Peanut finally knows what it’s like to be loved

Peanut was definitely more comfortable. But for the next two months, Russelline also worked to comfort her spirit. She had had so little interaction with anyone that she didn’t even know her own name.

“I would show up and spend half an hour with this dog, when you start showing up he was so excited about someone recognizing him, he wanted to jump on everyone, no one was spending time with him. I Showed up with treats and sat him down to get a pet. He was a quick learner. He’s smart. We just started doing obedience stuff. We played. He liked to play fetch.”

Peanut was still tethered in that shady corner of the yard, but thanks to Russelline, the rays of hope were beginning to shine. Although attitudes about how dogs should be viewed have been slow to change in too many cases, they recently got the boost they needed.

Around this time, a new law was unveiled in Pennsylvania that limits how long a dog can be on a leash. When Peanut’s owner was told by Russelline, he preferred to entrust him to HOPE rather than change the way he was treated.

And with that, Peanut was finally free. This dog would never be chained again and that was just the beginning.

After freeing Peanut from his old life, Russelline took him to Critter Camp and Cuts for a bath. Maybe his first bath in a long time.

So Peanut was released into a fenced yard at the facility after bathing so the dog could do something it had never done before in its life: roam freely.

“I cried; it was very emotional for me. This dog never got to run; the owner told me he hadn’t seen him run in three years… Imagine you could never run … When I released him, he was so happy.”

Peanut’s smile said it all, finally this dog knew how beautiful the world could be.

Now he is learning to adapt to life as a pet and has a foster family to teach him what it means to be wanted and loved. His rescuers would not have it any other way.

“HOPE protects these animals for the rest of her life, she will never live in chains day and night again.”

Sadly, stories like Peanut’s aren’t the only ones in the world. Russelline hopes that awareness of these situations will inspire others to get involved wherever possible.

Sometimes that requires building a connection with a dog owner to convince them to do the right thing.

To learn more about HOPE for Erie Animal Wellness, or to donate, visit their website.