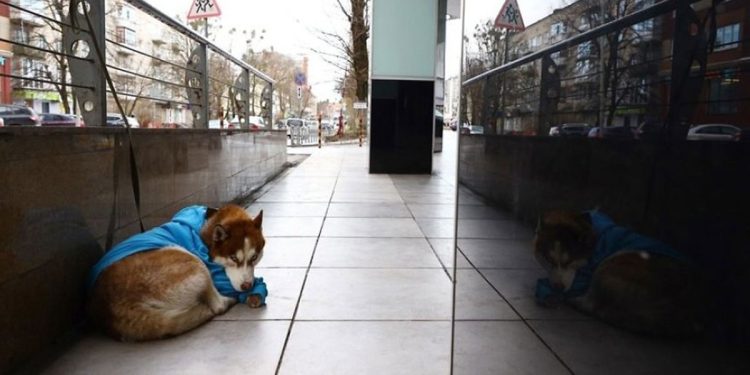 Dog that seemed abandoned, patiently waited for its owner to leave work to come home together

Every day, passers-by and shoppers in a shopping center in the city of Kaliningrad, Russia, can see a dog that looked abandoned waiting in the same spot. But it’s not a sad story of an abandoned dog, the canine is still waiting patiently in the same place for its owner.

The dog, a Husky breed, waits around 8 hours a day, until her owner Svetlana leaves work and they can go away together.

Although the story in question is well known to different people, it went viral when it caught the attention of local media outlet Klops.ru.

Husky waits for her owner until she leaves work

Reporters contacted the dog’s owner for details of what had been seen and discovered that the Husky was not actually abandoned.

After this incident, Svetlana decided to leave a note next to the dog, so people could make sure he wasn’t abandoned.

The note describes details that people wonder when they see the dog, detailing the real situation of the Husky in the place.

Moreover, he adds that: this dog is not abandoned! He is waiting for his owner to leave work! It is part of his routine to work with his owner.

It all started when Svetlana, thanks to her neighbors, realized that the dog couldn’t stand being left alone at home, because he was howling all day. For fear of being left without the rented apartment, following complaints from neighbors, she decided to think of something to remedy the situation.

So that the dog would not be left alone in the house, she decided to take him to work with her, and in this way they would do everything together. Since then, every morning when the alarm goes off, the dog runs excitedly for the door, ready to go to work with its mother.

During work, the Husky waits in one place Svetlana, she leaves every hour to check the dog and walk for about 10 minutes. Plus, at lunchtime, she spends her 40 minutes off having lunch with her beloved dog.

Even though the dog is on a leash, she says if she let him free, he would stay there, and her sad face is because she is not near him.

The dog needed lifelong love since he was a puppy, when he was separated from his father, the puppy was sold and given to a family. His new owners called the next day to return the little puppy, as they couldn’t stand his howls and cries of constant sadness.

Svetlana had already fallen in love with him, so she decided to give the little Husky a forever home and since then they have been inseparable.

She didn’t want to reveal the dog’s name for security reasons, but due to her success, the Husky wearing a blue sweater popped up on Instagram.

Now dog lovers around the world are watching their stories and sharing their daily adventures.

I don’t consider him a dog. He’s my friend, my son. We have the same zodiac sign, both Capricorns. I totally understand him and he understands me too.