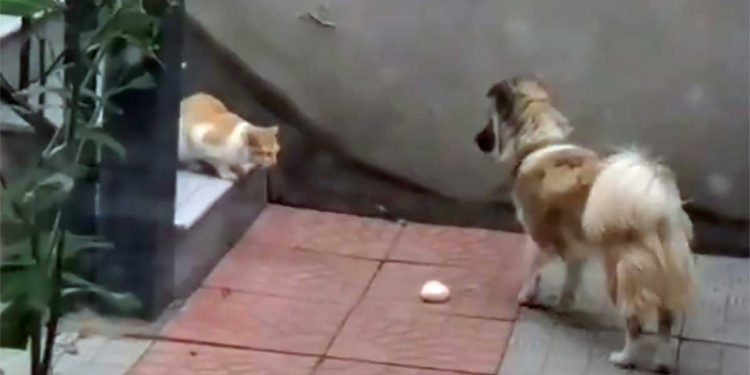 The adorable little dog named Pudding has touched the hearts of millions of people after a video was released where he is caught sharing his food with a cat who lives on the streets of eastern Shandong Province, China.

In images captured by Ms. Fu, in a garden outside her house in Weifang on Thursday, her dog Pudding can be seen bringing a meat bun to the hungry cat and apparently trying to feed it.

The moving moment touched millions of social media users who hailed Pudding as a “kind soul,” according to the Daily Mail.

I was working downstairs that day when I heard our dog bark at the top of the steps. When I looked I saw him go to his kennel to get his meatloaf, then he barked again.

Pudding took a bun of meat from his kennel and set it down in front of the little red cat who was resting by the garden steps.

At first, the cat remained alert, before finally giving in to the tasty temptation and taking a bite, only to be seen running away with the bun in his mouth.

I thought the dog would try to catch or fight the cat when it bit the bun. I had no idea what I captured with the camera was really happening.

In the video, Pudding is seen waving at the cat, wagging his tail and pacing, as if to encourage the cat to collect food. It was then that the hungry animal stepped forward cautiously, took the meatloaf and quickly went upstairs with the food.

Ms. Fu. She says she was very touched by the moment, as Pudding is a watchdog and is generally very protective of his food.

The cat was scared and didn’t want to come down the steps, so our dog walked away and kept his distance, allowing the cat to come closer.

The video has already racked up millions of views on social media platforms after Ms. Fu. Shared it on Douyin, the Chinese TikTok.

Thousands of people were moved by the action of the noble animal.