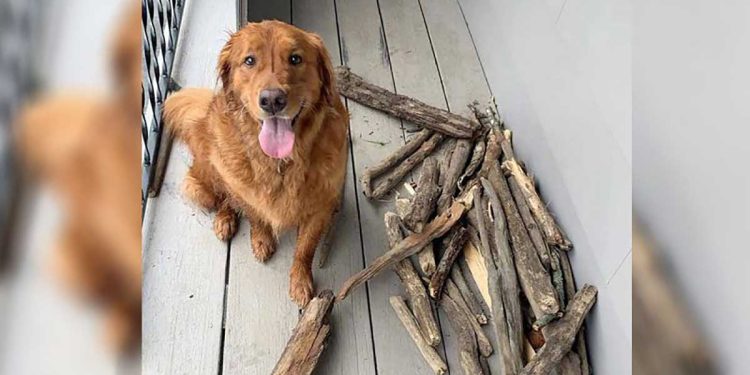 A charming golden retriever proudly shows his father the extensive collection of sticks he has collected.

Bruce is a charming golden retriever who lives with his father, Leo Icenhour. He is a very gentle and cunning furry man with a strange and curious mania. He loves collecting sticks.

Bruce is only allowed to play with rubber objects due to a stick accident two years ago that landed him in the hospital.

Despite his injury, his love for clubs has not waned, it has become nothing but a fine collection. He takes pride in collecting sticks of all shapes and sizes from our garden and setting them up right in front of our front door, checking them daily as we enter and leave the house.

This dog is proud of his collection of sticks

Bruce’s fascination with collecting sticks began a few years ago when, in a snowstorm, he forgot his favorite stick outside and the snow completely covered it. I was so distraught thinking I had lost it.

He had left his favorite stick outside the night it started to snow. The next day, Bruce was in total panic because he obviously couldn’t find it or even see the floor.

Bruce spent a lot of time digging holes in the snow. He looked anxious as he reached for his stick, and a little exhausted, he paused and waited for the weather to begin to warm up.

After the snow partially melted, he was finally able to dig and find his stick. I had never seen him more triumphant than then. I think she started the collection because she didn’t doesn’t want to panic anymore about losing her.

His dad forbids Bruce from bringing his sticks around the house, but the cunning golden one usually takes advantage when his dad gets a little distracted to put a few on and keep him by his side at least for a while.

The father of this curious golden knows that his pet really enjoys collecting sticks and proudly enjoys the growth of his collection.

He just likes to add things to his collection and he’s very proud of that.

You can follow Leo on Instagram and learn a bit more about Bruce and his particular collection.