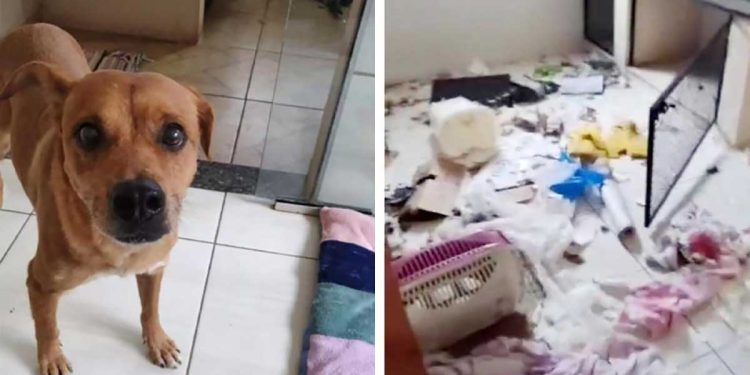 This angry dog ​​is throwing out the bins at the vet clinic after waking up to find he’s been neutered.

We all know that saying goodbye is never easy, but sometimes it can be the right thing to do. And that’s how it is with this sweet dog named LeLo who had to let go of some things that he had become totally and literally attached to.

LeLo visited the ClíniCão veterinary clinic in Brazil and apparently had no idea why he was there or what procedure he was undergoing. Although much to his annoyance, it would soon become very clear.

LeLo had been taken to the vet to be neutered, a routine operation without any complications. However, this was all apparently a really bad surprise for LeLo and she made that very clear.

After the procedure and waking up from the anesthesia a few hours later to find important parts missing, LeLo escaped from her kennel and decided to trash the place when no one was the wiser.

I think he was upset by the whole situation. [To see the mess he made] was amazing. It was amazing that a dog did all this.

Luckily, LeLo was unharmed during her little tantrum and seemingly accepted her newly neutered status.

He is fine, free to run again. His personality is very calm and caring in front of us, but he can be quite mischievous behind our backs.