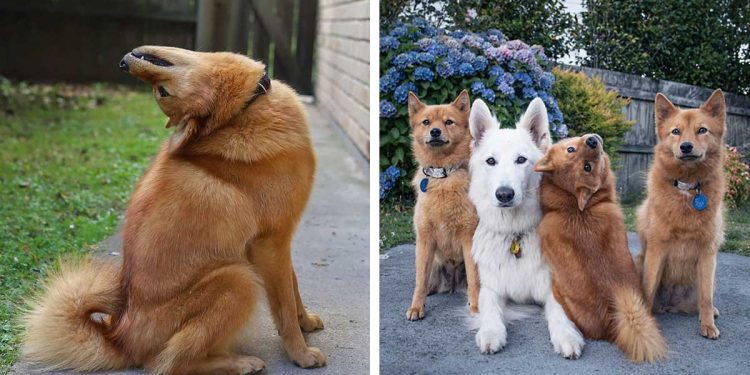 Kiko has a unique and slightly scary trick. This pup turns his head 180 degrees and loves to ruin group photos.

Kiko is a nine-month-old Finnish Spitz dog who has managed to perfect a trick that leaves everyone amazed. The dog, who lives in New Zealand with his family, can turn his head 180 degrees.

Although Kiko has performed this strange move since she was a puppy, her mother, Ashleigh MacPherson, taught her to do it when she said the word “Demon” to her.

Ashleigh said according to LAD BIBLE:

He’s dizzy, he’s so funny he always makes me laugh. She always did it, she wished she was a puppy, at first, she did it while she was sleeping, I always thought she liked to sleep like that.

The dog turns its head 180 degrees for group photos

The 28-year-old didn’t think it was weird, as dogs usually like to sleep in weird positions, but she started doing it to look back.

Instead of turning her head to the side to look like a normal dog, Kiko tilts her neck back; maybe you like looking at the world upside down.

The result of her strange gaze is similar to that of the possessed girl in the movie “The Exorcist”, something scary but funny.

Although the trick makes it seem like the general rules of biology have failed, her mother is quite proud of her beloved pup.

Kiko also uses the odd move to keep her human mother’s attention; each time he is on his back, he bends his neck back.

After several photos of the dog performing the unusual behavior caught many people’s attention, Ashleigh decided to perfect her trick.

Now every time she gives him the order, Kiko performs her number and not happy with that, she also insists on ruining the group photos. When Kiko’s pack poses for the camera, she rebels and turns her back on him, but then does her amazing nod.

When people see her doing it in public, their reactions are always the same. At first, they seem surprised and ask, how does he do that? and then you can see them smiling.

According to the woman, Kiko has been the best in these difficult times, she is a “Covid dog”, which means that she was born a few days before the confinement. The young woman was able to spend a lot of time with her quarantined pets, so Kiko’s companionship made her take full advantage of the isolation.

She is a rather relaxed, tender, gentle and affectionate dog. But she’s also sassy, ​​playful and has a lot to say.

These types of dogs are well known for being very vocal, Kiko has this characteristic, but he only uses it to talk to you.

Although Kiko’s ability can be a little scary, it turns out the pup is just as adorable as any other dog.

The only difference with Kiko is that he has a rotating head, but maybe his thing is because he was born in such a strange time.