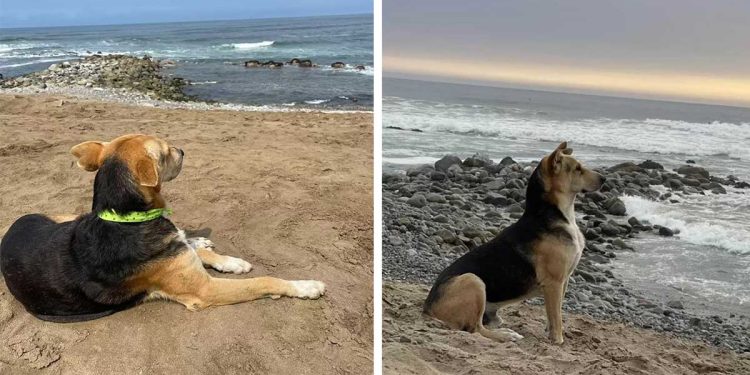 This nice dog visits the beach every day looking at the sea with the illusion of seeing his owner again, who will not return.

As Jolie Mejía and her family visited Punta Negra, a small coastal community near her home in Peru, and toured a space along a rocky coastline with beautiful sea views, they learned an incredible love story. pure.

After the woman and her family made themselves comfortable along the shore to enjoy the view and the breeze, a dog approached them and appeared to be alone.

He didn’t seem abandoned. He had a ribbon around his neck and his fur was clean. I pet him while waiting for his owner, but the minutes pass and no one comes.

The adorable dog enjoyed a few cuddles and games with Jolie, but the whole time his gaze was lost in the sea. The woman soon discovered the incredible and moving reason.

Jolie and her family were hesitant to adopt the dog, thinking he had been abandoned there. At that moment, a local man passed by, and she immediately asked him if he knew the story of the dog.

He explained that virtually everyone in the area knows the dog and is very fond of him. He told us that the owner of the dog was a fisherman who died a long time ago, and that the dog comes to the beach every day and look at the sea.

Apparently, the dog is waiting for his friend to return, although he is no longer coming home. Jolie believes the dog’s owner died about a year ago, and since then the dog has been sitting on the beach staring at the ocean.

The dog’s story is known to people in the community, who feed it, care for it and provide medical attention when needed. A local vet in Punta Negra confirmed the dog’s name is Vaguito and is in the care of a woman who lives near the beach.

At the end of the day, the family said goodbye to Vaguito, who always kept her eyes on the sea. But her story of loyalty to her human and the love she found in the community is something Jolie won’t forget.

I have a dog at home. I love dogs in general. His story really touched me.