Dog Waits Patiently For The Garbage Truck Driver Every Week 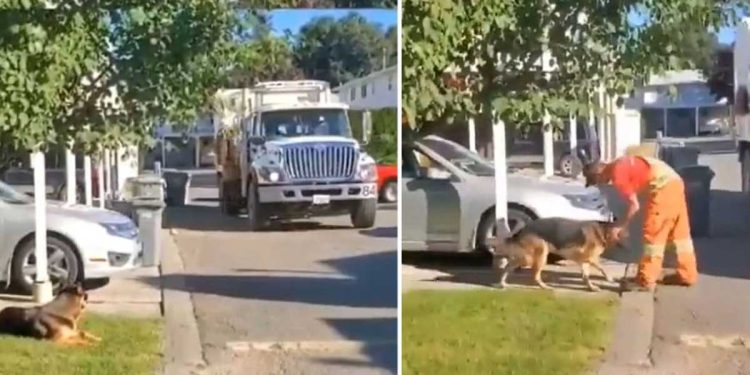 A charming dog waits patiently each week to see the garbage truck driver, and the meeting is already quite a cute routine.

A charming 4-year-old German Shepherd named Jett has always had the ease of making friends. But surely the relationship with Curt Stickley, the garbage truck driver, is one of the most important.

Derek Molter, Jett’s father, says that this interaction began a little over a year ago. As he was out in the yard and the garbage truck driver pulled over, Curt decided to ask if he could come over and pet the dog.

The driver got out and walked over to where Jett was laying and asked if it was okay to give him a treat. Of course, I said yes and friendship was born.

Dog waits for the garbage truck driver every week

It is a beautiful routine that this pair has developed. Jett hopes to greet Curt like this for just a few seconds, and it seems like that moment makes them both happy.

Every week if I’m home, I let Jett out and he runs and sits on the grass, patiently waiting for his friend Curt to stop by and bring him a treat.

A few days ago, Derek couldn’t keep up with the garbage truck passing his house, and for two weeks in a row, Jett couldn’t go out and wait for his friend. It was clear that the dog missed Curt and apparently he wasn’t the only one who missed the cute routine.

The man found a note in his mailbox that said “look inside” and there he found some dog treats.

Curt missed Jett too and wanted to show it somehow. Derek was so moved by this gesture that he decided to post the photos of what happened on Facebook and the story immediately went viral.

I even went to the length of calling the Kamloops City Solid Waste Department and spoke to the driver’s supervisor to praise his excellent service.

Derek tries to make sure he is home for the garbage truck tour so these two friends can have their short reunion without fail and Curt can see the dog for at least a few seconds. It’s one of the best routines Jett has.