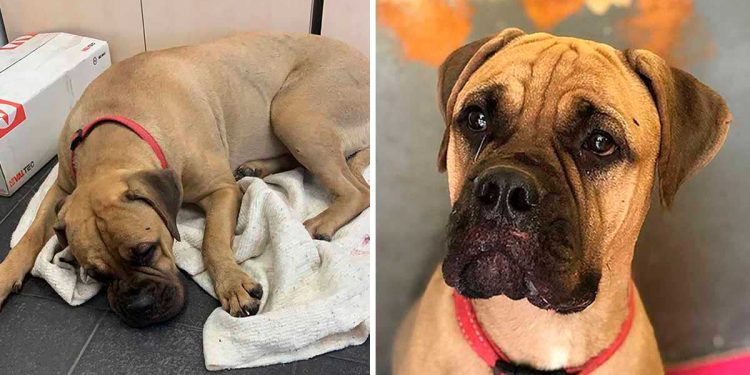 Maru was adopted by a couple who after six months decided to return her to the shelter. She was sent on a train from which she escaped to walk back to what she considered her home.

Alla Morozova is the owner of a shelter in Novosibirsk, Russia, where Maru, a noble Bullmastiff dog, was adopted by a couple when she was five months old. Unfortunately, after six months Alla received a call from the couple claiming to have allergies to animals so they needed to return her to the shelter.

I never give up my dogs and when they adopt one, it is stipulated that the owners should inform me if they can no longer have it.

Given the situation, it was decided to send Maru on a train back to the shelter and an assistant agreed to take care of him, but after approximately 125 miles of the trip , the train stopped at a station near Achinsk and the dog escaped, according to The Siberian Times.

Maru was very scared, the people she trusted the most had abandoned her, and the train was too noisy.

She jumped out the compartment door, kicked the handle, and nearly knocked the driver out of her way.

No one was able to detain her, immediately Maru’s manager contacted the couple to report her disappearance, and they contacted Alla, who requested that they go to the Achinsk area and search for her, but both refused.

The couple showed no concern, as if the dog was no longer under her responsibility at all.

Maru is believed to have been walking from that station to the Krasnoyarsk industrial zone.

On her side, she decided to spread messages about Maru through brochures and social media.

After two and a half days the dog was found in an industrial area of ​​Krasnoyarsk trying to reach her home where she had been rejected, she was injured and tired, with “tears in her eyes” according to her rescuers.

She had to go through the Russian forests, plagued with brown bears and wolves. It’s amazing that she survived and that she has such a developed sense of location.

Geographically, she had no point of reference. She walked alone in the city, she never went anywhere else.

Maru was tired, lame, her legs, her pads and her mouth were injured. She had fallen off a train embankment before being found.

If she had not been injured, the noble dog would surely have returned to the place that she considered her home.