Injured Climber Was Warmed By A Dog For 13 Hours 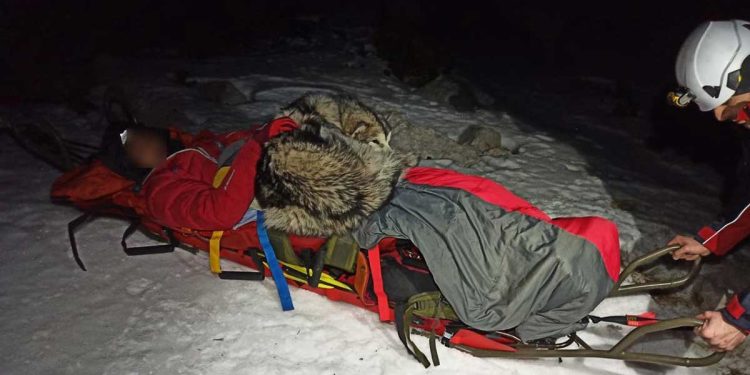 A dog saved the life of a hiker who had fallen into a Croatian mountain ravine by lying on top of him to warm him for 13 hours until rescuers arrived, Croatian media reported.

Grga Brkic was injured last weekend after falling 150 meters with his cousin’s dog in the Velebit mountain range near the Adriatic coast.

Rescuers struggled to reach humans and animals due to snow, ice and trees uprooted by the landslides.

“The friendship and love between man and dog is limitless,” the Croatian Mountain Rescue Service (HGSS) said on Facebook. In the photo released by paramedics, the dog is lying on a stretcher above the victim.

And he added that “due to a series of unfortunate circumstances, they hit the hill together yesterday afternoon. Together in happy and difficult times is life. North passed without injury, but his friend, a young climber, was unlucky. “

“He snuggled up next to him and warmed him with his body. His loyalty did not end with the arrival of the rescuer, he was among those who kept his man for 13 hours. From this example, we can all learn to take care of each other, ”he said.

Three hikers accompanied by North, an eight-month-old Alaskan malamute, had started their descent on an icy slope at the time of the accident, which occurred near the highest peak of the massif which is around 1,800 meters.

“North rolled over (the victim) and warmed her up,” HGSS said. “From this example, we can all learn to take care of each other.”

Alaskan Malamutes are thick, coarse-coated dogs known for their hardiness.

Through social networks, Internet users commented on the single case which caught the attention of Internet users: “The rescue operation at Velebit lasted more than 13 hours, and the dog was not separated from the climber during this time.”

“North spent five hours warming his friend in a well 150 meters deep. This dog saved her man from frostbite and far more serious consequences, ”Petface wrote on his Facebook account.