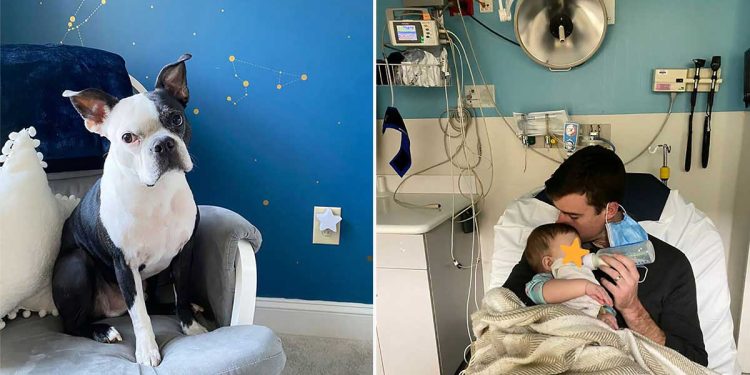 Dog Uses Intuition, Warns Parents Something Serious Is Happening With Little Sister And Manages To Save Her Life

Kelly Andrew shared a story on social media, showing how her dog Henry saved her baby girl’s life. The 8-year-old Boston Terrier apparently knew something was going on with the baby, so he decided to sneak into his room several times.

Kelly and her husband, Jeff, knew the baby had a cold, but they believed it was all under control with the care they were giving him. However, the pup could sense that something was getting worse, so he looked for a way to make it clear to his human parents.

Henry kept going to the baby’s room and waking her up, and although his parents scolded him, the dog insisted on doing it when they were careless.

Dog warns parents that something is wrong with the baby

Kelly was tired of her dog’s behavior, but it caught her attention as it was unusual for him, so she started to worry.

Suddenly the nine-month-old baby stopped breathing, but thanks to Henry’s sixth sense his parents were able to get him to the hospital on time.

Kelly said in an interview with Good Morning America:

She was not clearing her airways. She started to turn blue and stiffen, and she just couldn’t breathe.

Luckily, the doctors managed to clear the baby’s airway and made sure she was very healthy so she could go home.

The couple were impressed with their dog’s demeanor, but most of all, they were very grateful to Henry because he saved his little sister’s life.

They didn’t hesitate to congratulate him and say a lot of kind words to his four-legged friend, even saying that he would receive an extra gift on Christmas. The post quickly went viral as it touched the hearts of thousands of people, prompting everyone to comment on similar stories.

Apparently, there are many stories of pets who have performed some sort of heroic deed to help their families, which shows how important they are.

In addition, several scientific studies reveal that the good smell of dogs is also used to detect different types of diseases. Because according to science writer Mia Rozenbaum, dogs are known to detect cancer, malaria, Parkinson’s disease, COVID-19, etc.

Mia said, according to Bored Panda:

The sense of smell in dogs is so subtle that they can notice the slightest change in human odor caused by the disease.

For now, Henry receives many awards, as he has been allowed to sleep in bed and every day he receives rich portions of steak.

He’s never done anything so heroic before.

Her parents are proud of Henry, because thanks to her intuition, their little girl got a second chance in life.