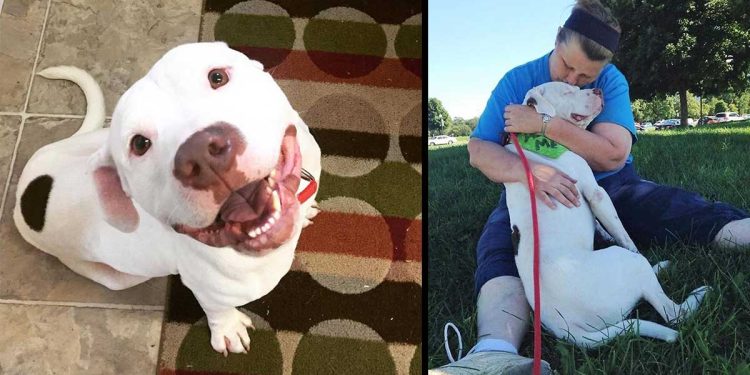 This dog was locked in his house for a long time after being abandoned with other dogs, but he was rescued.

Elmo is an adorable pit bull who went through a terrible situation of abandonment, and now he finally knows what it’s like to be free and surrounded by love. This dog was locked up in the patio of his house for a long time, where he had been abandoned with another dog.

The dogs’ previous family has not been identified and they were taken to the KC Pet Project, a nonprofit that operates the Kansas Municipal Animal Shelter in Missouri.

Tori Fugate, who is part of the KC Pet Project, told The Dodo:

We believe a neighbor likely noticed the dogs staying there and called Animal Control to report them.

The refuge allowed Elmo to walk in a park and various historical monuments of the city, he met many friends there, his change of face was impressive; when he was rescued, he looked very sad, but now he can’t help but smile.

She even went to a local beauty salon.

When Elmo arrived at the shelter, he was photographed and his expressions were full of fear and sadness.

He’s got this cute smile on his face when he’s running in the opposite direction or when he knows he’s going to be outside the dugout.

The rescue center offers dogs the opportunity to go outside through a program called the KC Pet Project’s “leave” program. It was a big moment in Elmo’s life, but ideally, he would finally find a home.

Elmo loves comfy beds, noisy toys, and most importantly, despite what he’s been through, Elmo really loves people, including children.

After being abandoned in his old home, you’d think he’d never trust humans again, but that’s not his case. When you meet Elmo and see his happy smile, you know he deserves a home and a loving family.

After Elmo’s story became known, a family decided to adopt him and make him happy.

They drove over 5 hours to Kansas City to meet our handsome smiling boy. It’s safe to say he’ll be loved and pampered in his new home, and they’re so lucky to get to see that happy, sweet face every day. Congratulations to Elmo!