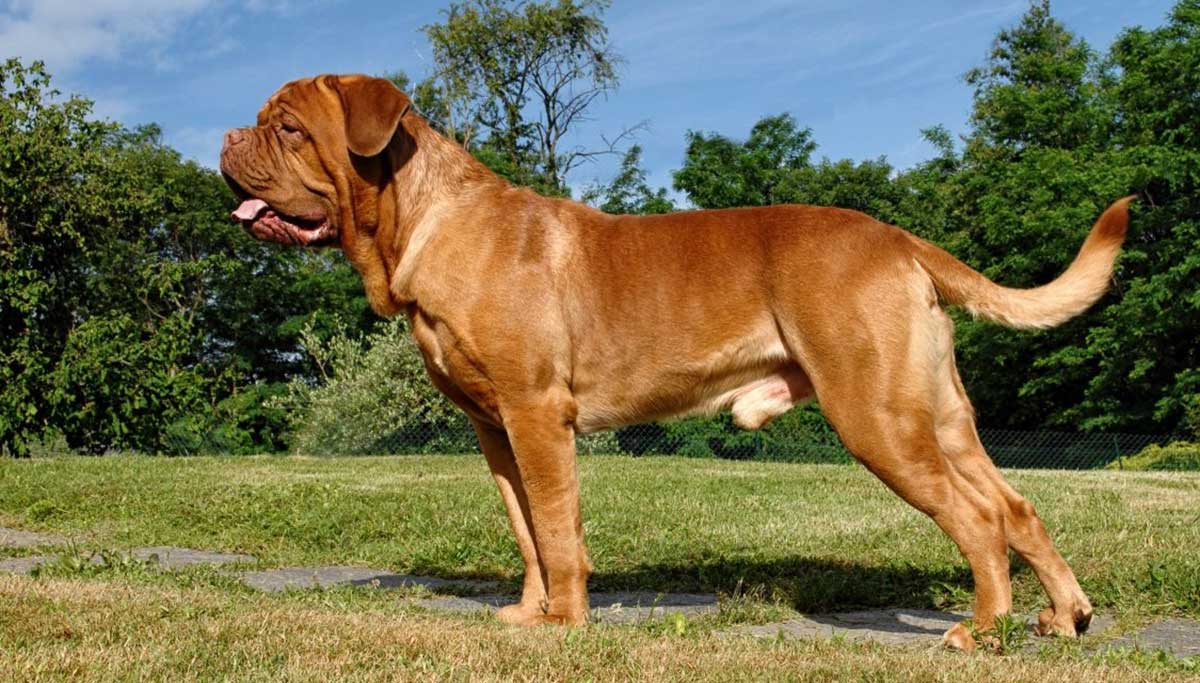 The dogue de bordeaux is a strong and powerful dog from France, which is part of the mastiff family. It is a breed of dog generally chosen to keep houses because of its size and personality, firm and determined, well trained to perform this function effectively.

This large dog is admired for its great power and its strong and imposing appearance. The Dogue de Bordeaux is known for its tranquility and for its great patience when it comes to living with children and with other more active dogs.

This breed is one of the oldest in France and today they are still very popular and well-known dogs. If you are thinking of adopting an adult Dogue de Bordeaux dog, it will be very important to be well informed in advance for the adoption to take place correctly.

Remember there are a few things to keep in mind about the Dogue de Bordeaux that we need to consider beforehand, such as having a dog license. In this ‘ Pets Feed ‘ breed file, we will detail everything you need to know about this dog:

The Dogue de Bordeaux is an old French breed, even if it is supposed to come down directly from the mastiff dog of Rome. In the 12th century, it was used in French reserves for hunting pig, wild boar, wolf and bear. In the Middle Ages, his function was to drive cattle.

These dogs have also been used in the war to protect livestock and even to harass other animals and in dogfights. The breed has lost its popularity in the 20th century, but today it seems that its numbers are increasing.

The general image of the dogue de bordeaux is that of a large and powerful animal. It especially stands out from the size of its head compared to the rest of the body, which has very marked skin folds. The nose is quite short, but it shows an incredibly solid prosthesis, advanced in its lower part, ready to catch prey of all types and all sizes.

The average lifespan of these animals is 10 years, although it may be slightly longer depending on the type of life they lead and current medical progress. The body of the Dogue de Bordeaux is rectangular in profile (longer than its height at the withers), muscular and solid. The upper line is horizontal. The chest is solid, long, deep and wide. The sides are slightly retracted.

Size of the Dogue de Bordeaux

The Dogue de Bordeaux can be classified among the large breeds of dogs. It has a solid, athletic figure and a large, well-proportioned trunk. It can measure up to 68 centimeters at the withers in the case of male specimens, and a female mastiff of bordeaux will remain between 58 and 66 centimeters in height.

As for the weight, the males easily weigh more than 50 kilos and the females more than 45 kilos.

The hair of the dogue de bordeaux is short, fine and hard, but it is also silky. The most common color of its coat is mahogany or fawn, although it supports all shades of red and yellow. He may have white spots on his chest and feet, and he has a red or black facial mask, the same color as the nose.

Other characteristics of this dog, include a short neck and baleen, a broad straight back, drooping triangular ears, a long strong tail and an elastic movement when walking and jogging.

Temperament of the Dogue de Bordeaux

The dogue de bordeaux is known for its calm and firm temperament. He is very cool, so it’s a breed to keep in mind as the protector of his family and the home. This calm and balance make it a dog that does not generally bark, except in specific cases, such as the appearance of an intruder in the house.

It is also a perfect breed to share life with young children and other animals, because the dogue de bordeaux does not need to demonstrate its domination, unless it is disputed. Despite his appearance, his character is warm and friendly, who likes contact with people and who has an almost infinite patience towards the games of the little ones. On the other hand, this dog is intelligent and docile, which implies that it is easy to train.

Once the limits are set, he likes to obey and please his family, so he will learn all the tricks that are taught to him and he will do them with pleasure. Although the task is not easy at first, because it can also be arrogant, independent and stubborn. The past of the dogue de Bordeaux can make us think that it is a violent or excessively territorial dog due to its use as a fighting and protection dog. However, the truth is that the Dogue de Bordeaux is generally friendly and calm.

It is a comfortable, intelligent and independent dog, with a very balanced personality. One detail to keep in mind is the great courage and affection he expresses for his partners in human life. In a situation that the dogue de bordeaux considers aggressive towards those it loves most, this dog can act negatively, as any beloved dog would do, but the difference is its large size and build. For this reason, it will be important to assess whether we have sufficient physical strength and adequate training time to provide it.

The dogue de bordeaux is a dog of great physical strength. However, his health is fragile and he can get sick quite easily. It is advisable to go to the vet frequently, about every six months, to keep your best friend healthy. Among the most common conditions in the dogue de bordeaux:

An ideal place of detention for this species is a large country house with a fenced adjacent territory. Dogue de Bordeaux can also live in an apartment, but there will definitely be not enough space for both a dog and household members. An aviary and a booth are also not desirable, the fact is that being away from the owner, and even on a chain, the dog will get bored, may become angry or decide that he has been unjustly punished.

Dogue de Bordeaux needs daily walks and exercise. He likes to be outdoors, but direct sunlight and high air temperatures must be avoided. This dog should be able to run freely in open space. In a crowded place you can’t let such a dog off the leash, so you need to find a suitable place.

These dogs have a fairly low energy level. With such a pet, it is enough to walk 1-2 times a day. The owner should know that in the first year of life, excessive physical exertion for Dogue de Bordeaux can lead to underdevelopment of muscles and bones. From this it follows that you need to be very careful in training, not to overload the pet. About an hour a day is enough for games.

Along with buying a puppy, be sure to buy a collar, a leash, water containers and food for him. Towels, detergents will also be required. Highlight a place of rest and sleep.

To make the dog look beautiful and grow healthy, do not forget about the following grooming procedures:

Dogue de Bordeaux is prone to obesity. This is due to improper feeding, too large servings of food and inactivity. The owner of a large-sized pet must provide him with a balanced diet and vital supplements.

Giant dogs, in addition to a huge appetite, need a different proportion of minerals and vitamins you need for proper joint and cartilage maintenance.

If you get a dogue de bordeaux puppy from a breeder, he will give you a feeding schedule and it is important to follow the same routine, feeding the same puppy food to avoid stomach upset. Older dogs are not known to be picky or fussy eaters, but that doesn’t mean you can feed them inferior food. It is best to feed a mature dog twice a day, once in the morning and again in the evening, making sure it is a good quality food that meets all of its nutritional needs.

It is also important that dogs get the right amount of exercise so that they burn any excess calories or gain too much weight, which can lead to all kinds of health problems. Obesity can shorten a dog’s life by several years, so it’s important to keep an eye on your waistline from the start.

It is important to correctly determine the daily portion of food. An adult dog should eat twice a day and eat about 1.5-2 kg. food. About 50-60% of the diet is protein food. Clean, cool water should always be in the dog’s bowl.

This dog breed does not need to do as much exercise as it may seem: about an hour a day is usually enough for an adult.

A few walks during the day, letting him run and play freely for a few minutes, is enough for this dog, because if he exercises too much when he is young, he can suffer from bone and joint problems when he is old.

Not brought up the dogue de Bordeaux with its large dimensions can cause the owner a lot of problems. Such a dog needs early socialization, proper education and training courses, preferably under the guidance of an experienced dog handler.

At 4-5 months, the puppy must master all the simplest commands: it’s impossible to sit, to me, a place, etc. It is important to complete obedience while walking, knowledge of the rules of conduct in public places and in the house.

When starting serious training lessons, keep in mind that the dogue de Bordeaux is an inactive animal, so too energetic classes will quickly tire the pet. It is recommended that you train about one to two hours at a time. In this case, an unacceptably rude attitude, instead of screaming, praise the dog for the correct execution of the command.

To supplement the information of this dog breed, here are some very interesting curiosities about this particular breed that you surely did not know:

If you are thinking of buying or adopting a dogue de bordeaux puppy, always contact a professional breeder who can give you more information about the breed and its needs. One should be wary of those who pay more attention to the price of the dogue de bordeaux than to other questions, and always demands to know the state of their parents. A dogue de bordeaux can be an excellent friend and adventure partner, but it also has specific needs that you will have to satisfy in order for your relationship to be the best for long. The most important thing is to be consistent in your education and socialization to always have a balanced, calm and friendly dog ​​with people and with other animals.